It seems that Rand Paul has a case of white guilt, while blurring the lines on whether he’s a liberal or a libertarian. 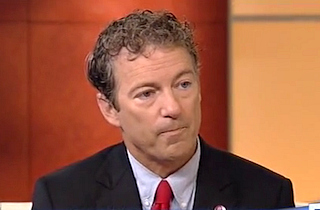 The libertarian-leaning senator from Kentucky was one of the few GOP members to speak out in August against the aggressive law enforcement response to local protests against the police killing of unarmed 18-year-old Michael Brown.

“Demilitarize the police,” he urged, noting that there should be a distinct difference “between a police response and a military response.” The op-ed also decried racial disparities in how law enforcement applies justice in many local communities — an issue often dismissed or outright ignored by his fellow Republicans.

Paul’s visit to the Missouri city of 20,000 residents marks the first time a potential 2016 hopeful of either party has made the trek. Politico has more details:

Paul met for 45 minutes with a group that included pastors, local businessmen and representatives of the NAACP, the Urban League and the Anti-Defamation League.

The session, which took place in a store front on the main drag of town amid pouring rain, came after a second night of street protests in next-door St. Louis after a white off-duty cop, in uniform and moonlighting as a security guard, killed another 18-year-old African-American. Authorities say that the teen, Vonderrick Deondre Myers, fired three pistol shots at the officer, who fired back 17 times.

Law enforcement agencies are preparing for riots if a grand jury opts in the next few weeks not to indict Officer Darren Wilson for shooting Brown.

[…] Wearing blue jeans, cowboy boots and a black turtleneck under a brown blazer, Paul sipped coffee as he went around a conference table. He came with a four-page handout for everyone that touted legislation he’s introduced during his four years in the Senate and the August piece he wrote for Time Magazine on the unrest.

The move comes as no surprise for those following Paul’s outreach to minority communities as part of what many expect to be his future presidential run. The senator has been an outspoken opponent of the war on drugs and mandatory minimum sentencing, which he has likened to Jim Crow-era policies. Sen. Paul has also criticized his own party for “going crazy” with the wanting stricter voter ID laws, an issue he has said “offends” the minority community and will only hurt the GOP’s attempts at outreach.

Previous [VIDEO] Rand Paul: 'GOP Not Reaching Out to African-Americans The Biggest Mistake We’ve Made’

Next DEA: 'We Are Interested In Americans' Investments In Canadian Marijuana Business'