As the second deadly Ebola case emerges in the U.S., the Democrats look to be losing the Senate, and the Islamic State (ISIS) continues its brutal march in the Middle East, where is President Barack Obama?

On the golf course. 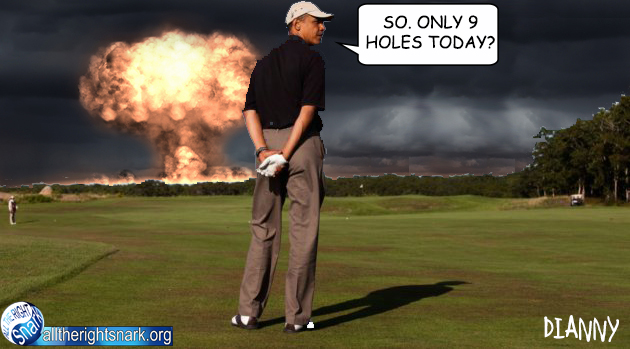 America’s duffer-in-chief notched his 200th round of golf while president on Sunday at the Belvoir Country Club, although his departure for the course was delayed by a call from Secretary of Health and Human Services Sylvia Burwell to report on the condition of the new Ebola victim, theWashington Times reports.

The Times noted that even legendary golfer Tiger Woods has played just 269 rounds of golf since 2009, “and that’s his day job,” the Times exclaimed.

“So the president spent a few minutes on the phone, then five hours on the golf course,” the Times opined. “So maybe Mr. Obama really has nothing to do. How else to explain a guy with an important job and two young daughters being able to pull off 200 rounds of golf in less than six years?”


Previous FBI CHIEF: 'Citizens Should Be Deeply Skeptical of Government'