THE DUTCH MOTORBIKE GANG TAKING ON ISIS: THREE MEMBERS OF ‘NO SURRENDER’ GROUP JOIN KURDS TO BATTLE JIHADIS AFTER PROSECUTOR SAYS THEY AREN’T COMMITTING ANY CRIME 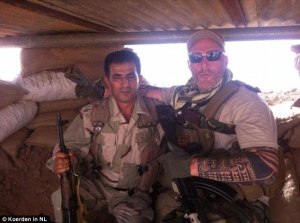 Members of a notorious Dutch motorcycle gang who have been pictured helping Kurdish forces fight ISIS in Syria have been told they are not committing any crime.

Three bikers from the ‘No Surrender’ Banditos gang travelled to Syria to help fight the Islamic militants last week, according to Klaas Otto, the head of the group.

Now the Dutch prosecutor has told gang members that they will not be prosecuted for going to fight abroad, because such actions are only illegal if you are fighting troops from the Netherlands.

A biker from the No Surrender gang in the Netherlands, identified only as Ron (right) poses alongside a Kurdish soldier in Syria after going to fight against ISIS

While several countries including Britain have taken steps to stop their citizens joining ISIS, joining the Kurds is generally permissible because they are not considered a terrorist organisation.


However, anyone going to fight ISIS would be banned from joining the Kurdistan Workers’ Party, who run several of the brigades fighting ISIS, because they are considered to be terrorists.

Dutch citizens fighting on the Kurdish side would of course be liable to prosecution if they committed crimes such as torture or rape, De Bruin said.

‘But this is also happening a long way away and so it’ll be very difficult to prove,’ he added.

Video footage apparently from a Kurdish broadcaster shows an armed European man with Kurdish fighters saying in Dutch: ‘The Kurds have been under pressure for a long time.’

There are estimated to be around 70,000 Kurds living in the Netherlands, most of whom are political refugees who fled from Turkey and the middle east looking for work.

US-led airstrikes have slowed the ISIS fighters down, but troops have still managed to push into the city where there are reports of beheadings and executions

The heaviest fighting between ISIS forces and Kurdish troops has been centered around the town of Kobane in recent days, as the militants push to take control of the strategic border town.

While Islamic fighters have entered the city, US-led airstrikes have slowed their advance.

Kurdish fighters captured the strategic hill of Tel Shair and pulled down the flag that had been fluttering for more than a week.

It followed a sustained stepping up of the U.S.-led airstrikes, with locals counting more than 30 bombs dropped on jihadi positions in the past 24 hours.

‘Over the past night there has been very intense airstrikes by the coalition that targeted several Daesh [an Arabic word for IS] positions in and near Kobane,’ said Idriss Nassan, deputy head of Kobani’s foreign relations committee.

The Dutch bikers are not the first westerners to join Kurdish forces. Former American soldier Jordan Matson became the first to fight alongside the Kurds after going to Syria earlier this month.

In a symbolic victory today, the ISIS flag was torn down from a strategic hillside where it had been flying for more than a week