When they aren’t yelling [email protected]#$ The Police, they are discussing “white Privilege”. They are referring to the “great white flight” whereas the “white” people moved out of North St.louis County starting in the 70’s. The reason for the move would most likely be based upon crime rather than something of racism. 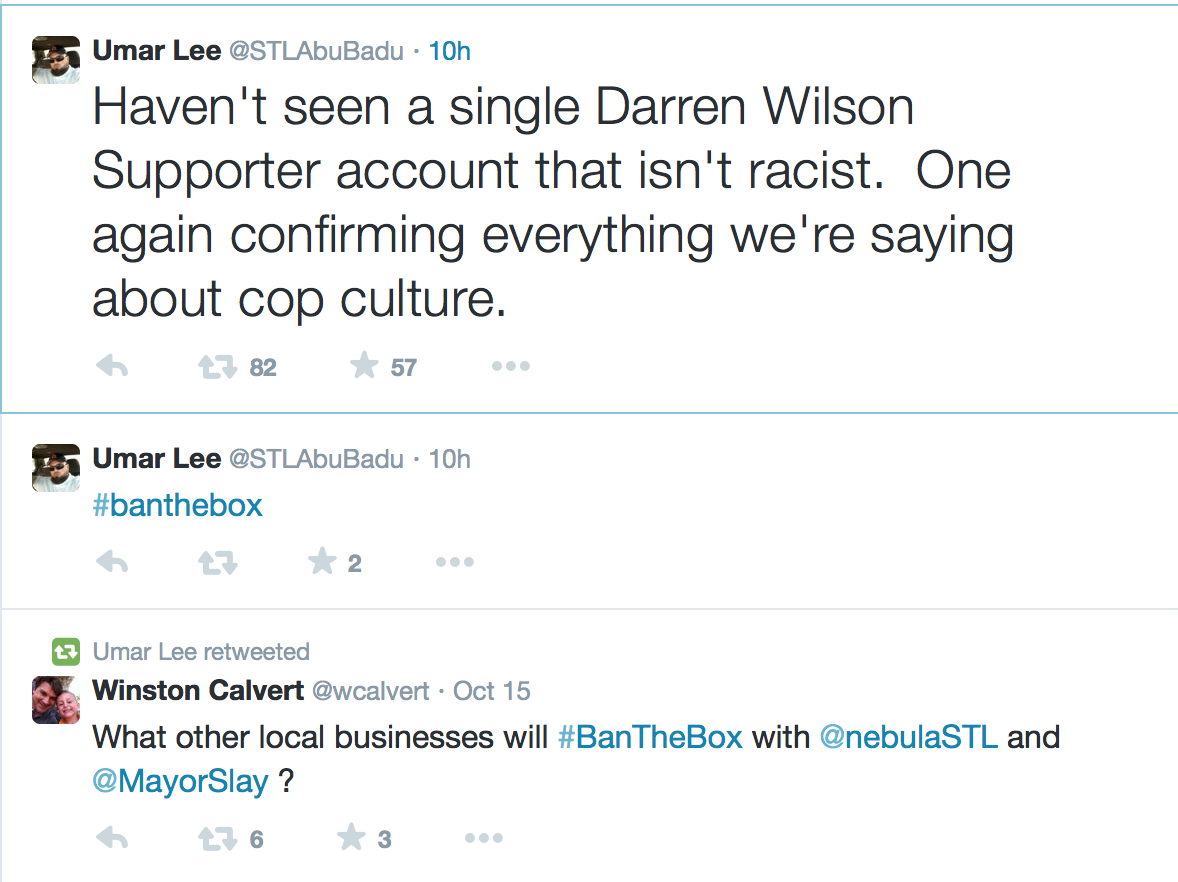 #Bloods and #Crips uniting with Black Panthers against police in #Ferguson

You can view the video here: Video original source: https://www.youtube.com/channel/UCvrUn2nT-hiBtRyKoXAyImg?spfreload=10%20Message%3A%20JSON%20Parse%20error%3A%20Unexpected%20EOF%20(url%3A%20https%3A%2F%2Fwww.youtube.com%2Fchannel%2FUCvrUn2nT-hiBtRyKoXAyImg)       See more: [VIDEO] ‘Justice For Everyone!’ Thousands Protest Against Police Brutality In St. Louis, Ferguson Hundreds of protesters standing in front of the Ferguson police department are demanding justice for […]

[VIDEO] ‘Justice For Everyone!’ Thousands Protest Against Police Brutality In St. Louis, Ferguson

Hundreds of protesters standing in front of the Ferguson police department are demanding justice for Mike Brown, a black teenager killed by a white cop. Rallies in downtown St. Louis have drawn thousands, all standing up against police brutality. The mother of […]

Protests in the suburbs of St. Louis kicked off a weekend-long series of rallies against racial law enforcement profiling that has left two black teenagers dead. Activists confronted police decked out in paramilitary gear, but the night ended peacefully. Locals dominated the […]

It seems that Rand Paul has a case of white guilt, while blurring the lines on whether he’s a liberal or a libertarian. Republican Sen. Rand Paul reportedly headed to Ferguson, Mo., on Friday morning for a “listening session” with local black religious […]

by Carmine Sabia, Biz Pac Review The streets near Ferguson were literally on fire Thursday night with protesters chanting for the death of Officer Darren Wilson, the cop who fatally shot Michael Brown. In the Shaw neighborhood for a second night, they […]

[VIDEO] Ferguson protest leaders: ‘We’ll take our anger out on people who failed us’

Organizers of demonstrations in Ferguson, Missouri, promised to intensify their protests over the killing of Michael Brown if the officer who shot him does not face criminal charges, warning police that they are prepared to die on the streets for their cause. […]

The cable news klieg lights, Al Sharpton and Jesse Jackson may have moved on, but residents of Ferguson, MO continue to experience nearly nightly unrest stemming from the shooting death of Michael Brown. Eye witnesses have told Breitbart News that pro-Palestinian and other Muslim […]

FERGUSON PROTESTORS HAVE SAID THEY WILL “BURN THE CITY TO THE GROUND” IN WILSON NOT INDICTED Ferguson, Missouri residents threw violent temper tantrums because race baiters inflamed tensions of the shooting death of Michael Brown by Officer Darren Wilson. Now officials are preparing […]

‘Take back our tanks’: Police can’t get rid of military gear in Ferguson aftermath

Police departments that have been slammed for increased militarization through the Defense Department’s surplus equipment program now have a new dilemma. Some of them have discovered they cannot give their unused war supplies back to the Pentagon. The DoD’s Excess Property Program […]

Grand jury considering the Ferguson shooting is being investigated for misconduct

The St. Louis County prosecutor’s office is investigating an accusation of misconduct on the grand jury that is hearing the case against the Ferguson police officer who shot and killed 18-year-old Michael Brown. Ed Magee, the spokesman for county prosecutor Robert McCulloch, […]

As if the governor of Missouri hasn’t done enough to prove what a race-baiting and worthless piece of sh*t he is, the Ferguson chief of police decided he would try to one-up the governor with his own form of stupidity. Hours after […]

On the heels of yet another night of violence against Police and against innocent businesses in the community of Ferguson. Stay tuned folks Ferguson isn’t over yet     ST. LOUIS  •  A group of Ferguson protesters are vowing to disrupt MetroLink service […]

Dear God in heaven, people have lost their minds… Demonstrators and police officers faced off in Ferguson again overnight. At one point, an estimated 150 to 200 demonstrators were on West Florissant. Shots were heard, but no one was hit. Then […]

UP IN SMOKE: Michael Brown Memorial Burns Down in Ferguson

A memorial to slain teenager Michael Brownburned down Monday night, according to Ferguson fire officials. It is not known what caused the fire, though the candles kept lit in vigil around it may be to blame. The memorial was assembled over one […]

Next RAND PAUL: Obama Made Americans Think Ebola Is Like AIDS