While there is no Ebola outbreak in the United States and health officials have said there is little reason for the general public to be concerned, the fact remains that some Americans are scared. 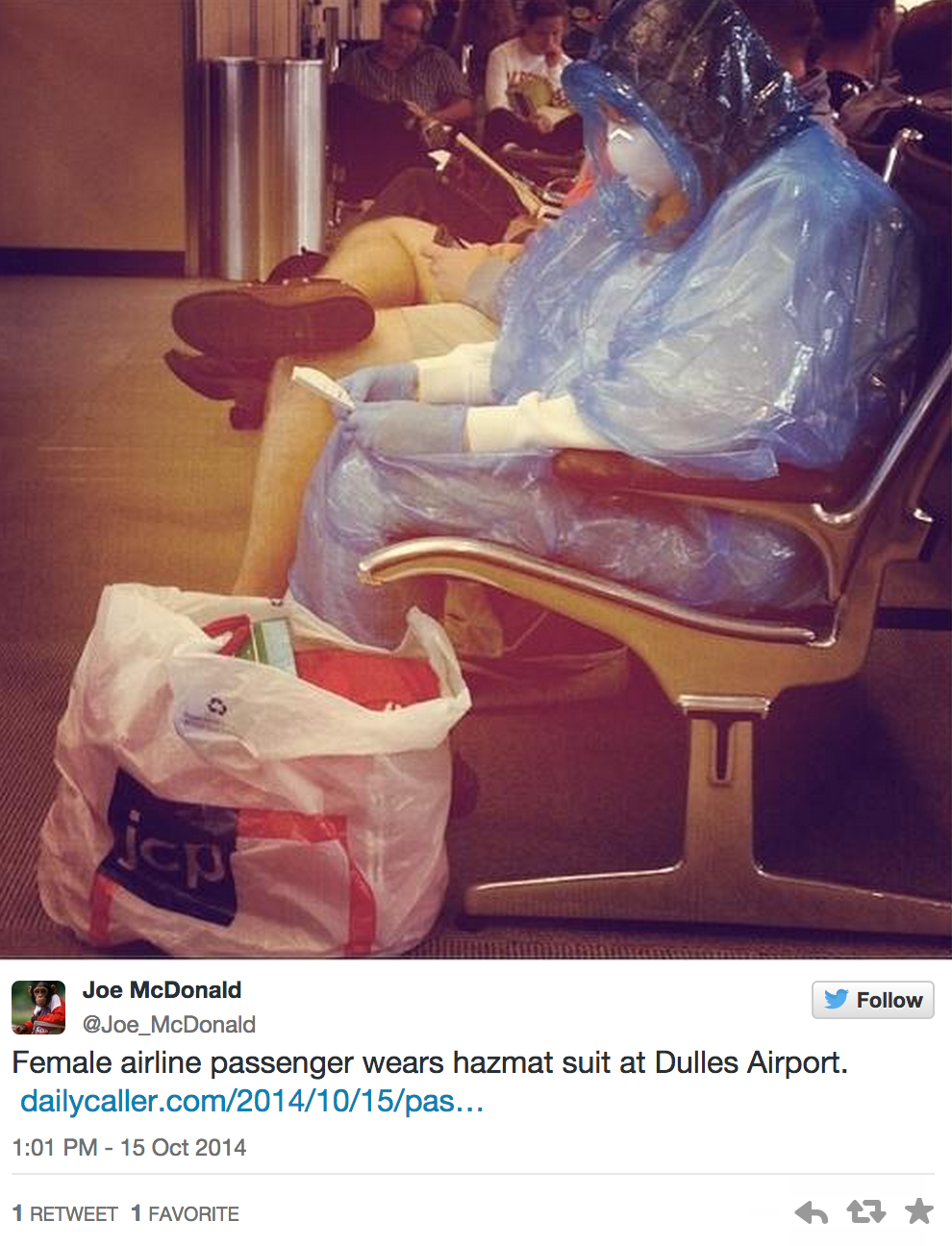 Then there was this doctor who last month donned similar gear to make a statement about his own international travel and a lack of checks at the airport.

“We here in health intelligence have seen the broadest spectrum of behavior that you can possibly imagine,” Katherine Harmon, director of health intelligence at iJET International, an operational risk management company, told TheBlaze. “We look for that kind of thing and what people are doing and what people are not doing in terms of diseases. Whenever you get these sort of anomalies — I’d call this an anomaly because who would think Ebola would pop up in America — it throws people for a loop.”


If you truly are concerned about protecting yourself from Ebola because you feel there is a risk, there are some things you probably shouldn’t do, but some practical things you could consider for your own peace of mind.

Things That are NOT Practical

While you might think that a trip to Home Depot for a painter’s suit, a set of goggles, gloves and a sawdust mask is in order, these items will not protect you from the virus should you somehow come into contact with infected bodily fluids. The personal protective equipment worn by medical professions is of a specific quality and grade. There are also very specific ways that PPEs must be put on and taken off to be considered effective. PPEs are only recommended for those in health care settings who are serving patients infected with or suspected to have Ebola.

Most of the suits are one-time use, so anyone wearing one to protect against a pathogen would technically have to get a new one every time they used the restroom, Mothe added.

Regardless, the paper suits bought at a home improvement store are “not going to protect you,” Mothe said.

“How much is a painter’s suit going to protect you against maybe a microscopic amount of blood that could potentially get on your suit,” she continued.

You don’t have to give up travel or use of public transit to get to and from work. Ebola is not considered an outbreak in the U.S., but it’s also not airborne. The virus is transmitted only through direct contact with bodily fluids.

Even Peter Piot, a scientist who helped discover Ebola in 1976 when he was just 27 years old, said several months ago that he wouldn’t be concerned about sitting near someone who was positive for the disease.

“I wouldn’t be worried to sit next to someone with Ebola virus on the Tube as long as they don’t vomit on you or something. This is an infection that requires very close contact,” said Piot, now the director of the London School of Hygiene & Tropical Medicine.

Many children were kept from Dallas-area schools after the first Ebola patient was reported there. Now, news of the second infected nurse who flew from Texas to Ohio and back before testing positive is prompting school closures in both states, as well as buildings at a San Diego college campus because of concern over secondary contact involving passengers on the flight.

“What is the purpose of that?” Mothe asked. “The only way going to get infected is if you come into direct contact with somebody actively showing symptoms of Ebola and touching their fluids.”

While initial reports said the nurse, identified as Amber Vinson, did not have symptoms when she flew, more recent accounts suggested she may have been symptomatic earlier than thought.

Harmon said she has seen people trying to capitalize on the current fear factor surrounding Ebola by encouraging them to buy special kits or to quarantine themselves. Harmon said that, in general, such measures aren’t warranted.

On the opposite end of the spectrum, Harmon said she’s seen a “very small minority” of people in the U.S. who don’t believe the situation at all.

“[They] think it’s just a conspiracy … to get you to buy into more government control” and let the government “institute martial law and take away rights in the name of disease,” she said.

This No. 1 staple of all personal hygiene also holds true when it comes to Ebola as well. In itsrecommendations, the CDC says soap and water is sufficient to wash away the virus. It also said the use of an alcohol-based hand sanitizer is fine as well, though if hands are visibly soiled, nothing can replace good old soap and water.

So regular soap is good enough?

“The soap itself has a form of detergent,” Mothe said. “The detergent properties of soap will actually destroy viruses and bacteria … anything it comes into contact with because it breaks up their membranes.”

If you travel to a country in West Africa impacted by the historic outbreak, avoid people exhibiting symptoms of Ebola and do not touch any of their bodily fluids. While some of these fluids would be obvious to avoid — vomit, diarrhea and blood — other fluids such as saliva, breast milk and semen should be avoided as well. The CDC also recommends not coming into contact with the clothes, bedding or other belongings of an infected person.

The same is true if you experience any type of illness yourself, Harmon said.

“Practice social distancing when people are sick. Sneeze and cough into crook of your arm and not in your hands. [Don’t go] out when you’re ill, spreading those things around,” Harmon said — all common-sense practices most people already do around illnesses like the flu.

“More information about the actual biology and transmission of the virus is needed” to help quell unmerited fears of how Ebola spreads, Mothe said. “Everyone needs to take a step back and think ‘What is Ebola? What is the actual risk?’”

As has been reiterated by health professionals many times recently, Ebola is not airborne. Though the theoretical possibility for Ebola to mutate and become airborne or change its mode of transmission has been discussed lately, Mothe, like many others, said it’s very unlikely.

“As of right now, we don’t have any indication that Ebola is mutating or changing to become airborne,” she said. “There are not enough cases for it to become endemic…for it to be able to do that, it itself has to change.”