Two Christian ministers who own an Idaho wedding chapel were told they had to either perform same-sex weddings or face jail time and up to $1,000 in daily fines, according to a lawsuit filed Friday in federal court.

“Right now they are at risk of being prosecuted,” attorney Jeremy Tedesco told me. “The threat of enforcement is more than just credible.” 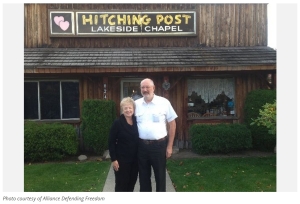 The wedding chapel is registered as a “religious corporation” limited to performing “one-man-one-woman marriages as defined by the Holy Bible.”

However, the chapel is also a for-profit business and city officials said that means the owners must comply with the local nondiscrimination ordinance.

That ordinance, passed in 2013, prohibits discrimination based on sexual orientation and it applies to housing, employment and public accommodation.

City Attorney Warren Wilson told The Spokesman-Review in May that the Hitching Post Wedding Chapel likely would be required to follow the ordinance.

“I would think that the Hitching Post would probably be considered a place of public accommodation that would be subject to the ordinance,” he said.

He also told television station KXLY that any wedding chapel that turns away a gay couple would in theory be a violation of the law “and you’re looking at a potential misdemeanor citation.”

Wilson confirmed to Knapp in a telephone conversation that even ordained ministers would be required to perform same-sex weddings, the lawsuit alleges.

“Wilson also responded that Mr. Knapp was not exempt from the ordinance because the Hitching Post was a business and not a church,” the lawsuit states.

And if he refused to perform the ceremonies, Wilson reportedly told the minister that he could be fined up to $1,000 and serve up to 180 days in jail.

Next FEDERAL COURT: Cops Need A Warrant To Grab Your Cell Phone Data