Young people who torture and kill animals are prone to violence against people later in life if it goes unchecked, studies have shown. A new federal category for animal cruelty crimes will help root out those pet abusers before their behavior worsens and give a boost to prosecutions, an animal welfare group says. 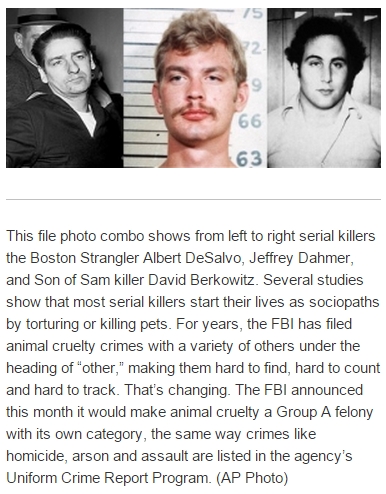 For years, the FBI has filed animal abuse under the label “other” along with a variety of lesser crimes, making cruelty hard to find, hard to count and hard to track. The bureau announced this month that it would make animal cruelty a Group A felony with its own category — the same way crimes like homicide, arson and assault are listed.

Officers will start to see the data are facts and “not just somebody saying the ‘Son of Sam’ killed animals before he went to human victims and 70-some percent of the school shooters abused animals prior to doing their acts before people,” said Thompson, a retired assistant sheriff from Prince George’s County, Maryland.

FBI studies show that serial killers like Dahmer impaled the heads of dogs, frogs and cats on sticks; David Berkowitz, known as the “Son of Sam,” poisoned his mother’s parakeet; and Albert DeSalvo, aka the “Boston Strangler,” trapped cats and dogs in wooden crates and killed them by shooting arrows through the boxes.


Previous [VIDEO] EBOLA IN AMERICA: 1,000 People Under Some Level of Watch

Next ATTENTION: Do not walk your dog here! Muslims do not like dogs!