According to the Seattle Times,  on Friday, an unnamed U.S. Postal worker in Bellevue, WA was arrested for allegedly hitting a pedestrian with her mail truck while “laughing hysterically.”

Bellevue Police Department say it all started when a local resident reportedly saw a mail woman cursing at someone in front of an elementary school and decided to photograph the incident in order to make a complaint to the USPS. 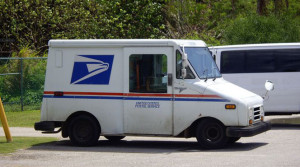 We believe that’s the very definition of going postal.

The 55-year-old woman was promptly arrested. No word on the charges she is face.


Previous GOLIATH ENCOUNTER: There's A Spider The Size Of A Puppy!

Next CITY TO MINISTERS: Perform Gay Weddings or Receive $1,000 Fine and 6 Months In Jail