Montressia Williams’ Walmart co-workers think she is on vacation, but her trip to New York is anything but.

The trip, paid for by labour organisers, is a part of the national protests to demand better wages, schedules and treatment for low-wage workers at retailers like Walmart and McDonald’s. Thursday’s protests, which started with a march on McDonald’s and ended in front of Alice Walton’s New York condo, were organised by groups like Our Walmart, United Food and Commercial Workers International Union, New York United and Retail Action Project. 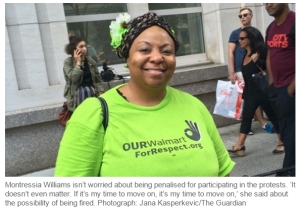 While most of the signs asked for $15 hourly wages, there were other issues weighing on Williams’s mind – like healthcare and her spotty schedule.

“Because I am part-time right now, they are taking away my health benefits. I already don’t get dental and now I am not going to have health insurance,” she said, concerned about what this would mean come January and whether loss of insurance would translate into a penalty under the Affordable Care Act. “I don’t even know if I am eligible for Obamacare or anything.”

At 34, she has been with Walmart for 14 years now. Even though she earns $13.71 an hour, more than most Walmart workers, she still struggles to make ends meet.

“They cut my hours really bad. I get a 50-cent raise every single year. I earn that when I come in with a good attitude,” she explained. Raising her hands to demonstrate a scale, she continued: “Every time Walmart gives me a 50-cent raise on this hand, on the other hand they take it away a different way. They are leaving me to have a paycheck that is $300 to $400 every two weeks.”


Previous SNOWDEN: When you say, ‘I have nothing to hide,’ you’re saying, ‘I don’t care about this right'

Next Small Town Facing Bankruptcy After Being Sued For $97.5 Million Over Police Negligence