Mike Hubbard, speaker of the Alabama House of Representatives and a powerful leader in the state Republican Party, has been indicted by a grand jury and charged with 23 counts, including using his office for personal gain and soliciting things of value.

Late Monday afternoon, Hubbard reported to the Lee County Jail where he was booked. 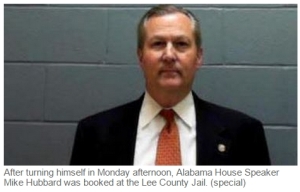 If convicted, Hubbard faces a maximum penalty of two to 20 years in prison and up to $30,000 in fines for each count.

Hubbard, 52, who led a historic Republican takeover of the state Legislature during the 2010 election, was charged after an investigation in his home county that has lasted more than a year.

The charges against Hubbard include 23 class B felonies. Those charges include:

According to the indictment, Hubbard solicited favors from some of Alabama’s rich and powerful.

Next INCARCERATION NATION: Mississippi Locks Up More People Per Capita Than China And Russia