The Pennsylvania Supreme Court on Monday suspended one of its members over his participation in a state government pornographic email scandal that involved employees of the attorney general’s office.

The justices issued an order saying Justice Seamus McCaffery may not perform any judicial or administrative duties while the matter is reviewed by the Judicial Conduct Board, which investigates allegations of judicial misconduct. 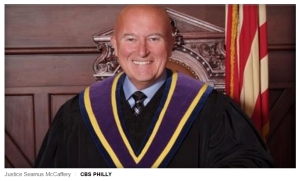 The main order also noted allegations about McCaffery’s actions related to a traffic citation received by his wife, who is a lawyer, and referral fees she obtained while working for him as an administrative assistant. It also noted he “may have attempted to exert influence over a judicial assignment” in Philadelphia.

The Judicial Conduct Board was given a month to determine whether there is probable cause to file a misconduct charge against McCaffery, a Philadelphia Democrat elected to the seven-member bench in 2007.

McCaffery’s lawyer, Dion Rassias, said they were confident he will be cleared and will soon return to the bench.

The court’s action followed disclosures last week by Chief Justice Ronald Castille, a Republican, that McCaffery had sent or received 234 emails with sexually explicit content or pornography from late 2008 to May 2012. McCaffery apologized, calling it a lapse in judgment, but blasted Castille for “a vindictive pattern of attacks” against him.