The man accused of shooting at police stations, patrol cars and officers in three Washington cities told detectives he wanted to be killed and was disappointed in their marksmanship. 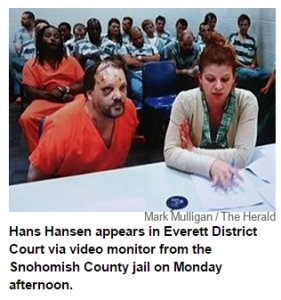 The statement is in an affidavit filed Monday in Everett District Court before Hans Hansen’s expected court appearance. It says Hansen was upset, took eight guns and shot up police stations and cars in Granite Falls and Lake Stevens before he was arrested in shootout with officers in Marysville on Wednesday.

The Daily Herald reports that Hansen was jailed over the weekend after his release from the hospital and was held without bail on suspicion of multiple counts of assault and drive-by shooting.