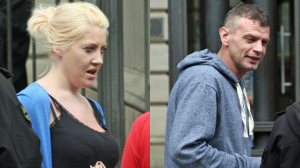 She was a mother with a very young child, but she had continued to deny her guilt for the offence.

This is consistent with increased enforcement of the sharia. The UK banned me from entering the UK for fear Muslims would violently riot. But they allow hate preachers and radical imams to come and incite to jihad. They have surrendered the freedom of their people to the most extreme, brutal and intolerant ideology on the face of the earth.

A teenage girl and 39-year old man who desecrated an Edinburgh mosque by attacking it with strips of bacon have both been jailed.

Chelsea Lambie, 18, from Paisley, was sentenced to 12 months and Douglas Cruikshank, from Galashiels, to nine months.

They attached bacon to door handles and threw strips inside Edinburgh’s Central Mosque on 31 January 2013.

Sheriff Alistair Noble, at Edinburgh Sheriff Court, said: “It does not seem to me there is any way to deal with this case other than by custody.”

During an earlier trial, the court heard a Blackberry mobile phone was found in Lambie’s clothing when she was arrested at her boyfriend’s house.

Messages sent on 31 January included: “Going to invade a mosque, because we can go where we want.”

A text to the phone asked: “What you do last night?” The reply was: “Went to the mosque in Edinburgh and wrapped bacon round the door handles, opened the door and threw it in ha ha ha.”

Google searches on the phone were for the location of the mosque, addresses for taxis and “Edinburgh mosque bacon search”.

A security guard at the mosque told the trial of the offence the bacon would have caused to Muslims.

Usman Mahmood said: “I was surprised if a person did it for a joke. It is against our culture and religion.

“We do not eat pork or even touch it. I felt very bad seeing this meat in my sacred place.

“It hurt my feelings when I saw this meat hanging inside the mosque in the worshipping area. It was very disturbing.”