This is pretty much par for her course… You can find all kinds of great tidbits on her and her antics. Here is the story.

Sen. Nasheed had handgun on her at time of arrest, refused breathalyzer, police say:


FERGUSON, Mo. (KMOV.com) – Missouri State Senator Jamilah Nasheed had a gun in her possession at the time she was arrested Monday night outside the Ferguson Police Department, according to Ferguson Police Chief Tom Jackson.

Nasheed declined comment about the having the weapon, but did tell News 4 she has a concealed carry permit. A Ferguson police officer said Nasheed was carrying a fully-loaded 9 mm handgun and additional rounds of ammunition.

Sources also told News 4 Ferguson police requested St. Ann to administer a breathalyzer test at the time of her arrest because she “smelled strongly of intoxicants,” but Nasheed refused to do so. Nasheed said Tuesday she was not intoxicated at the time.

Charges related to the gun or possible intoxiation are being considered by the Ferguson City Prosecutor. According to state law, it is “not illegal” to drink and be in possession of a permitted gun.

Nasheed was formally charged with Failure to Obey Lawful Order of Police and Manner of Walking in the Roadway.  She was released from St. Ann jail before 11:00 a.m. Tuesday morning. 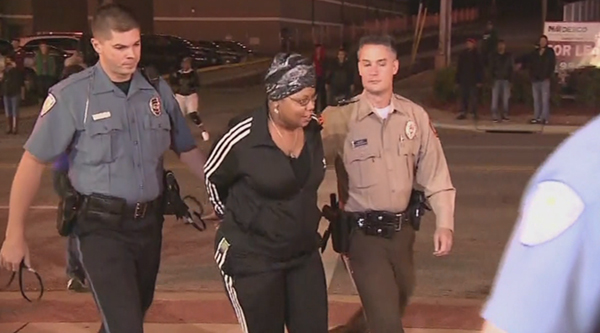 Nasheed is scheduled for her first court appearance on January 15, 2015.

Police said Nasheed and Nelson were arrested for violating the City of Ferguson ordinance for walking in a roadway where sidewalks are accessible.  Police said they warned the two numerous times to move out of the street.

St. Louis Alderman Antonio French tweeted Monday night that Nasheed was refusing bond and that her chief of staff called her actions an act of civil disobedience.

Next VIDEO BREAKING NEWS: Shooting at Canadian parliament building Gunman on the loose