“Imagine you are at home wearing your New Hampshire citizen hat, and you get a call from a pollster asking the following question: Do you approve of the job President Obama is doing?” the moderator asked. “Now, there will be a chance to follow up, but this is a yes or no answer. Do you approve, yes or no?”

“In some ways I approve and some things I don’t approve,” Shaheen replied, sparking laughter from the audience.

She went on to argue that many times there aren’t “simple answers” for policy makers.

Shaheen’s opponent is former Massachusetts Republican senator Scott Brown, who has criticized the Democrat for voting with Obama.

Obama’s has a low approval rating nationwide, but likely voters in New Hampshire also give the president bad marks, which is probably why Shaheen wasn’t ready to answer “yes” to the debate moderator’s question.

As Shaheen did in a previous debate, she cast Brown as an outsider who doesn’t understand New Hampshire. He repeatedly called her a rubber stamp for President Barack Obama’s administration, reminding voters she has voted with Obama 99 percent of the time.

Shaheen emphasized other numbers, however, including hundreds of workers at a federal prison she helped open in northern New Hampshire, 1,200 people her office has helped avoid foreclosure and 129,000 veterans who can get health care closer to home thanks to a provision she and Republican Sen. Kelly Ayotte sponsored.

“What we need is a senator who’s going to work for New Hampshire, who’s going to make sure we address the concerns we hear from our constituents, who’s going to be willing to work with Democrats, Republicans, independents – anybody in Washington who can help us get the job done for this state,” she said.

Brown responded, “She just described me,” saying he was once the most bipartisan member of the Senate. 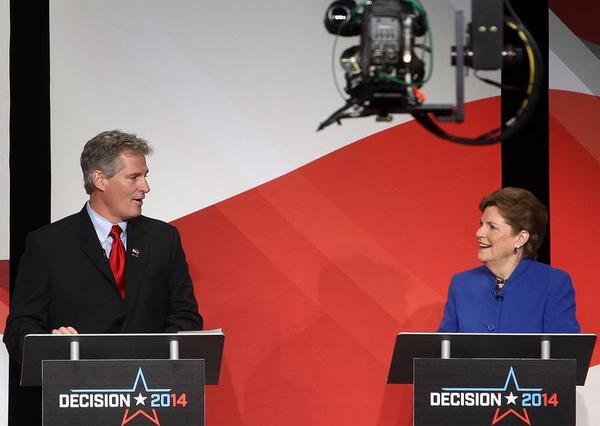 When Shaheen later criticized him for not backing a comprehensive border security and immigration reform bill she and Ayotte supported, he said he opposed it because it would have given incentives to people who have been in the country illegally.

“That’s what it’s like to be an independent senator: You can disagree with your party,” he said. “I’m not going to rubber-stamp a bill that doesn’t work.”

Brown has been arguing that the rise of the Islamic State group in the Middle East points to the need for greater border security in the U.S., a position Shaheen called “grandstanding.” And she said his attempt to tie concerns about the spread of the Ebola virus to border security were “fear mongering.”

Asked about the Obama administration’s decision to tighten the nation’s defenses against Ebola by requiring that all arrivals from the disease-ravaged zone in West Africa pass through one of five U.S. airports, Shaheen said she’s open to the idea of a travel ban only if it becomes clear that it would improve the situation. Brown said that a ban is overdue and that the administration has acted too slowly.

Given a chance to question each other, Shaheen asked Brown, “Why in the world would you support outsourcing American jobs?” She said he voted to provide tax credits for companies that ship jobs overseas when New Hampshire was losing a high number of jobs to China.

Brown, who denied voting to outsource jobs, said voters should consider other meanings of the word.

“You said you’d be an independent senator, but you outsourced that independence when you voted with the president over 99 percent of the time,” he said.

This story has been updated.

Next The truth about young black men and police shootings