James Kimber, a Democratic congressional candidate for California’s 50th district, wore a U.S. Navy SEAL trident for more than a year without ever completing the training for the elite force.

According to the San Diego Union-Tribune, Kimber served more than 20 years in the Navy, but the “unearned trident” incident nearly cost him his career.

The Navy SEAL Trident is a highly recognizable and coveted piece of military insignia that includes an eagle holding a Navy anchor, a trident and a flintlock-style pistol. It is issued only to officers and enlisted service members who complete the Basic Underwater Demolition/SEAL training, a six-month course held at the Naval Special Warfare Training Center in Coronado, Calif. (Photo credit: Shutterstock)

The newspaper reported that Kimber started SEAL training at the Naval Special Warfare Training Center in Coronado, California, in 1990, but hurt his back during an obstacle course exercise. According to the Union-Tribune, “He remained at the base for several months, and was eventually assigned to the guided-missile frigate Reid.” 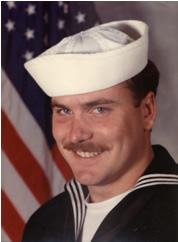 James Kimber while he was an enlisted Navy member. (Image source: Kimber for Congress)

A source familiar with the case told TheBlaze Kimber didn’t take the trident off until he was “called out” by SEALs who questioned his timeline.

“The SEALs showed up to the ship and started questioning his story and brought it up to the captain,” he said.

Kimber, who now works as a physician’s assistant, acknowledged to the Union-Tribune that the ship’s captain brought him before the crew and reprimanded him.

“I know this is a big thing and I am very sorry,” said Kimber, who was 32 at the time. “I knew what I was doing, and it was a terrible mistake that I hope doesn’t negate everything else I have done in my life and what I am doing now.”

The SEAL trident is a highly recognizable and coveted insignia with a golden eagle holding a Navy anchor, a trident and a flintlock-style pistol; the badge is issued only to officers and enlisted members who complete the six-month Basic Underwater Demolition/SEAL training.

Despite the incident, Kimber eventually achieved the rank of senior chief before retiring in 2002. He acknowledged that he thought the trident story would emerge during the campaign, and that he planned to address questions about it if it came up.

“I knew when I decided to run that this might come up, and said to myself that I would answer it if it did,” Kimber said. “It was more than 20 years ago and it was a horribly embarrassing and stupid thing to do … fortunately, I was able to finish my Navy career.”

Kimber, a Democrat, is attempting to unseat three-term Republican Rep. Duncan Hunter, who continues to serve in U.S. Marine Corps Reserves and took part in combat deployments to Iraq and Afghanistan.

“He served his country for 20 years and that is worthy of appreciation,” he said.

But a spokesman for Hunter’s re-election campaign told TheBlaze a question of “stolen valor” cuts deep, especially in military community.

“In a place like San Diego, where Navy SEALs are part of the community, this stings more than it would ordinarily, even if it was 20 years ago, because we’re talking about someone who is running for office, who cites his military background, and who would be expected to uphold the public trust,” the spokesman said.

The Kimber campaign office did not return TheBlaze’s request for comment.


Previous A Letter to Mayor Parker, From a Christian in Houston

Next Screw-ups on Ebola: Another failure of big, expansive and expensive government