A Pennsylvania high school’s football season has ended over allegations that older players waterboarded freshmen and forced them to grab other players’ genitals.

The Intelligencer reports that Central Bucks West High School’s coaching staff has been suspended over the allegations. Central 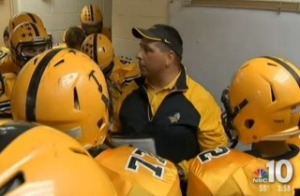 Bucks Superintendent David P. Weitzel said in a statement that the school conducted an investigation into “improper conduct” by players and failure of the coaching staff to “properly supervise activities.”

The police chief said towels were placed on the heads of younger players, who were then sent into the showers. While the investigation concluded that no players engaged in criminal activity, the case has been re-opened and investigators will determine if criminal charges are warranted.

Watch the report below, via NBC 10 Philadelphia:

Previous Unlike our own Muslim-in-Chief, Canadian Prime Minister wastes no time calling a terrorist a terrorist

Next OCTOBER 24th -- 10 facts about EbOla you need to know