Saturday Night Live kicked off last night with an over-the-top mockery of President Obama‘s handling of the Ebola crisis. As the fake president explained, hey, it’t not like they handled it as badly as they did ISIS, Obamacare, or all the rest of it…

In fact, as the president explained, “This whole Ebola thing is probably one of my greatest accomplishments.” He then brought on Ebola czarRon Klain to take questions from the press and advised voters in Southern states like Louisiana and Kentucky to 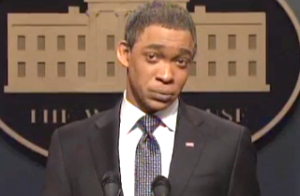 avoid large crowded areas like, say, polling places, for the next week or so. (Latinos in those states, however, may have an immunity.)

And just when you thought things couldn’t get more ridiculous, Al Sharpton himself took the stage to assure panicked New Yorkers that all is well… in a very Sharpton-ish manner.

Watch the video below, via NBC: