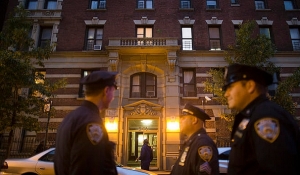 A group that advocates for Africans in the Bronx is calling for action after it says two brothers who had recently immigrated to the borough from Senegal were beaten and badly injured by several people who called them “Ebola” in school.

The 11- and 13-year-old boys, in sixth and eighth grade, respectively, were attacked Friday afternoon at I.S. 318 in Tremont, according to the African Advisory Council. Their father, Ousame Drame, said they were pummeled by other students in the
schoolyard during lunch after enduring weeks of taunts.

The boys, who have been in the U.S. for about a month, were taken to the hospital after the attack.

Drame said his sons have been cruelly harassed for two weeks over Ebola. Days after news broke that the deadly disease was in the United States, he said students, whispering the word, “Ebola,” told other students not to talk to the boys. They were treated like cancers, he said.

“If they go to the gym they don’t want them touching the ball – ‘Oh, you have Ebola, don’t play with us,’” Drame said.

Though the children were raised in Senegal, they were born in America — and have every right to be here, their father said.