A Philadelphia police officer who was caught on camera cursing and threatening a teenager with physical violence will be disciplined, police sources told NBC10.

In footage posted Oct. 17 on Facebook, an unidentified officer is seen following a group of teenagers before confronting one particular young man.

“Big man, do we have a problem?” the officer asked during the 12-second video. “Because I notice that you keep trying to make eye contact with me. Is there a problem?” 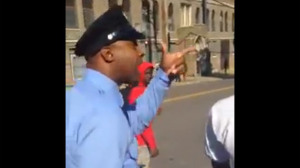 The teen appeared to reply to the officer, but what he said was not clear.

“The next time you look me in my f***ing eye, I’m gonna beat the s**t out you! Now get the f**k out….” he added before the video ended abruptly.

The Facebook user who posted the clip did not describe the situation or offer any details as to when or where the confrontation took place. NBC10 reported that its request for comment from the poster was not answered.

Meanwhile, as of mid-Tuesday, the video had been viewed nearly 122,000 times and shared on Facebook nearly 3,000 times.

Next Walmart In Hot Water Over 'Fat Girl' Costumes