President Barack Obama stressed Tuesday that the U.S. government’s response to the Ebola outbreak must be based in science, and not fear. 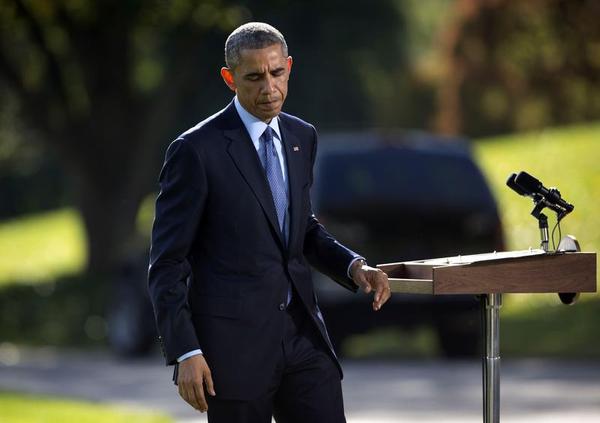 President Barack Obama walks away his podium after speaking about Ebola from the South Lawn of the White House in Washington, Tuesday, Oct. 28, 2014. (AP Photo/Pablo Martinez Monsivais)

“America in the end is not defined by fear,” Obama said. “That’s not who we are. When we see a problem and a challenge, then we fix it. We don’t just react based on our fears. We react based on facts and judgment.”

The White House has been somewhat at odds with the governors of New York and New Jersey, who imposed quarantine policies on health workers returning from West Africa. One nurse was very vocal about being mandated to stay in a New Jersey hospital despite testing negative for the virus; Gov. Chris Christie (R) said Monday she was being released and permitted to return home to Maine.

“What’s also critically important is making sure that all the talent, skill, compassion, professionalism, dedication and experience of our folks here can be deployed to help those countries deal with this outbreak at the source,” Obama said, speaking on the South Lawn of the White House. “That’s why yesterday the CDC announced we’ll have new monitoring and movement guidance that is sensible, based in science and tailored to the unique circumstance of each health care worker that may be returning from one of these countries.”

Obama addressed the question of why health workers are not isolated within the Ebola hot zone the same as military personnel.

“The military is in a different situation, obviously, because they are, first of all, not treating patients. Second of all, they are not there voluntarily. It’s part of their mission that’s been assigned to them by their commanders and ultimately by me, the commander in chief,” Obama said. “So, we don’t expect to have similar rules for our military as we do for civilians. They are already by definition, if they’re in the military, under more circumscribed conditions.”

Obama said he would meet Wednesday with doctors who have returned from West Africa, as well as those who are on their way there to treat Ebola patients.

“When we have volunteers who are taking time out from their families, from their loved ones, so forth, to go over there because they have very particular expertise to tackle a very difficult job, we to want make sure that when they come back that we are prudent, that we are making sure that they are not at risk themselves or at risk of spreading the disease,” Obama said. “But we don’t want to do things that aren’t based on science and best practices.”

Obama spoke about the government’s response to the Ebola outbreak before departing for a campaign stop in Milwaukee.

He said that progress is being made in West Africa thanks to medical personnel and the military effort, including building infrastructure in Liberia to better treat the disease.

“The point is that this disease can be contained and will be defeated,” Obama said.


Previous ‘The Democratic Party Is Abusing Us’: These Men Have a Scathing Message for Obama and ‘Black Leadership’