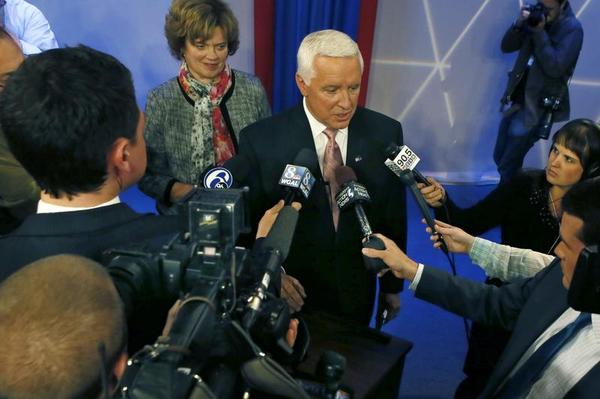 Republican Governor Tom Corbett, center, stands with his wife Susan, as he answers questions after a debate with Democratic party candidate for governor of Pennsylvania, Tom Wolf at the WTAE-TV studio in Wilkinsburg, Pa. on Wednesday, Oct. 8, 2014. (AP Photo/Keith Srakocic)

The bill signing could rally support from gun owners for Corbett in the final stretch of his campaign where he trails Democratic candidate Tom Wolf by double digits in most recent polls.

The National Rifle Association called the bill, “the strongest firearms preemption statute in the country.”

“This critical pro-gun legislation strengthens the state firearms preemption statute to further ensure that firearm and ammunition laws are consistent throughout Pennsylvania and allows citizens to seek legal remedies against localities whose gun control ordinances exceed state law,” the NRA said. “A much-needed protection for gun owners in the Keystone State, HB 80 will provide a way for responsible gun owners to hold municipalities accountable and responsible for infringing on our Second Amendment rights.

Under the law, if a local government ignores the new law and loses a challenge in court, it must pay for the challenger’s legal fees.

Last year, the organization Open Carry Pennsylvania won a lawsuit against the City of Erie for an ordinance that bans guns at municipal parks.

“If there’s a need to make amendments to our ordinances, we’ll certainly go ahead and do so to comply with the new law,” Karle said.


Previous The Government Can Seize Your Property, Without You Being Charged With A Crime

Next Students Suspended From School For Posing With Fake Guns