Conservative lawmakers like Sens. Ted Cruz (R-Texas), Rand Paul (R-Ky.), Mike Lee (R-Utah), Rep. Mick Mulvaney (R-S.C.), and others are prepared to give GOP leadership “hell” and push for a more conservative agenda if Republicans are able to take control of the Senate in November, Politico reports.

The news publication apparently interviewed more than a dozen Republican lawmakers and senior aides — and it was reportedly made clear that a GOP-controlled Senate would come with a different, more uncompromising set of tactics than have been employed recently. 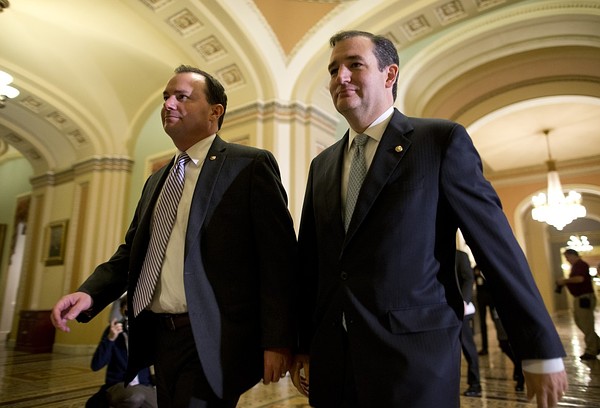 Sen. Mike Lee, R-Utah, left, and Sen. Ted Cruz, R-Texas, walk to the Senate floor to vote on a bill to raise the debt ceiling and fund the government on Capitol Hill on Wednesday, Oct. 16, 2013 in Washington. (AP Photo/ Evan Vucci)

Rep. Mulvaney said GOP leadership can no long use the excuse of “we can’t get that past the Senate,” which he says “creates a really good opportunity for conservatives.”

More from the Politico report:


Their plan is to pressure Boehner and McConnell into taking up bills designed to force the Obama administration to defend some of its most unpopular policies, including the 2010 health care law. And they want to increase border security without any legislative sweeteners like increases in visas for high-tech workers or allowing a pathway to citizenship for undocumented immigrants. Conservative Republicans also want to create work requirements for welfare recipients and force Obama to veto the Keystone XL pipeline.

All of these legislative priorities are top goals for Republicans broadly, but conservatives want to keep the bills “pure” rather than make deals with Democrats.