A 16-year-old high school student and his girlfriend were reportedly suspended from school after posing with fake guns in pictures before a homecoming dance.

According to reports, Tito Velez and his 16-year-old girlfriend Jamie Pereira were posing for pictures before their dance at Bristol-Plymouth Regional Technical High School in Taunton, Massachusetts when they decided that, dressed in their formal clothing, they would pose with two Airsoft guns. 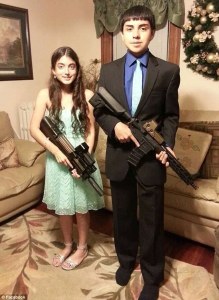 Later on, the couple posted the photos online, and in turn, “hundreds of students” viewed them, ultimately causing a “significant disruption” at school the next day. As a result, both Velez and Pereira were suspended for up to 10 days and will soon face a hearing to decide when they can return to school.
“We wanted something unique and different instead of using flowers like everyone else,” said Velez, who regularly participates in Airsoft games, to WCVB. “We were like, ‘let’s use something we like to do on the weekend as a prop.’ This [gun] isn’t dangerous, you can’t kill someone with it. We didn’t shoot anyone, we were pointing them at the floor.”
Jailes Pereira, of Middleboro, Mass., told FoxNews.com that his daughter Jamie and her boyfriend Tito Velez, both 16, meant no harm when they posted the photo on Facebook late Friday.

“It was an innocent mistake,” Pereira said. “It was a totally innocent, stupid mistake that Tito made by putting the word ‘homecoming’ at the bottom of the photo and then posting it to Facebook. If he had not posted the word ‘homecoming,’ there would’ve been no problem. I understand [school officials’] take on it, but it was not intended with malice at all.”