After a North Carolina State Fair was declared to be a “gun-free” zone, two people were reportedly robbed at gunpoint as they left the fair.

Police said the robbery occurred at around 11:30 p.m. on Saturday, when two people who were walking back to their car were accosted by men in a tan or cream colored Lincoln car. 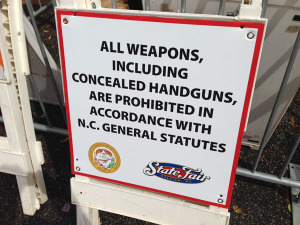 The attackers reportedly brandished handguns and took the victims’ wallets.

In a court ruling earlier this month, Wake County Superior Court Judge Donald Stephens ruled against allowing concealed firearms at the state fair, saying that it would be “unwise and imprudent” to allow concealed weapons at the event.

As The Blaze reports, opponents of the gun ban blamed Stephens and other officials for the robbery, and even claimed that the ban was illegal in the first place.


Paul Valone, president of Grass Roots North Carolina, told Guns.com that “By announcing to violent predators that people attending the North Carolina state fair would be unable to protect themselves, the responsibility for this armed robbery of fair-goers lies squarely with Agriculture Commissioner Steve Troxler.”


Previous Report: If Republicans Take the Senate in November, Conservative Lawmakers Are Ready to Give GOP Leaders ‘Hell’

Next When Chris Christie Met a Hurricane Sandy Heckler, the N.J. Governor Responded Exactly How You Might Expect