In a week when journalists have spoken out about the Obama administration’s treatment of the news media, the New York Times editorial board said outgoing Attorney General Eric Holder should make changes to the Department of Justice attitude toward press freedom before leaving his post. 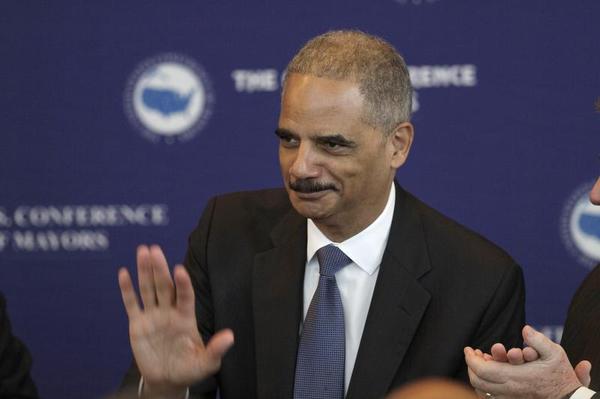 Attorney General Eric Holder waves after speaking to a meeting of the U.S. Conference of Mayors at the Clinton Presidential Library in Little Rock, Ark., Oct. 8, 2014. (AP/Danny Johnston)

The Times editorial board said Holder “bears responsibility for undermining robust journalism by his overzealous leak investigations and his opposition to recognizing a reporter’s constitutional or common law privilege to protect sources.”

The newspaper editorial board has been critical of Holder’s Justice Department in the past regarding the leak investigations and treatment of reporters.

A group of news media representatives was scheduled to meet with Justice Department officials Thursday, according to the Times.

“Mr. Holder should make sure the guidelines wording is changed back to avoid a potential loophole,” the Times said.

Holder on Wednesday said that given a do-over, he would have done things differently with Fox News reporter James Rosen and would not have named him a co-conspirator in a leak investigation. Holder also said he hopes to have a resolution to the case of New York Times reporter Jim Risen and insisted that no reporter would go to jail.

The Times editorial board has previously said ruling out jail is not enough, because it still leaves the door open to other penalties, such as imposing fines.

While Holder said in July 2013 that he cares about the “the importance of the constitutionally protected news gathering process,” the newspaper’s editorial board criticized him in February for not enacting guidelines to protect journalists.

After Holder announced in September he was stepping aside, the Times published a mostly praiseworthy editorial about his legacy, but said he directed “misguided energy to preventing leaks.”

“In the zeal to stop leaks of government information, Mr. Holder brought more prosecutions under the Espionage Act than during all previous presidencies combined,” the Times said in September. “In tracking the sources of leaks, prosecutors seized phone and email records of journalists who were doing their jobs.”

This week, former CBS News reporter Sharyl Attkisson’s new book, “Stonewalled: My Fight for Truth Against the Forces of Obstruction, Intimidation, and Harassment in Obama’s Washington,” said the government compromised her work and home computers after she began investigating stories such as Operation Fast and Furious and Benghazi.

Over the weekend, USA Today reporter Susan Page, when speaking at an event sponsored by the White House Correspondents Association, said the Obama administration’s antipathy toward the press is historic.

“This administration has been more challenging to the press, more restrictive, more dangerous to the press certainly than any administration in American history, in terms of legal investigations and so on,” Page said. “Access to the White House has just gotten worse and worse and I’m worried that that is the new floor for the next administration and we will never regain access or ability to do reporting, do our job, unless we just constantly fight the battle.”

On Wednesday, a reporter commented in a question to White House press secretary Josh Earnest, “You’ve gone after reporters again and again in this administration to find out who leaked information to them.”

Earnest said that characterization does not represent administration policy.

“We’ve made really clear — and the attorney general has made clear — what I think is a pretty common-sense principle, which is that journalists should not face jail time for just doing their jobs,” Earnest said.

Next If Democrats Really Pinned All Their Election Hopes on This One Thing, They Really Could Be in Trouble