Just days before an election that will likely see Democratic losses in the House and Senate, some Democrats are already trying to blame that result on Republican attempts to restrict blacks from voting.

It’s an argument that many Democrats are likely to stoke over the next two years as they try to restrict states from imposing voter ID laws, and as they make the case for electing a Democratic president in 2016. 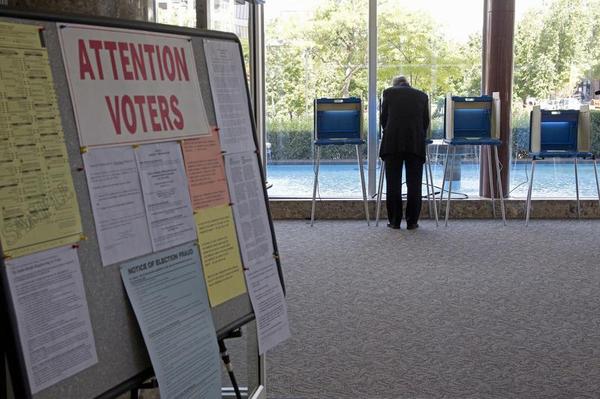 Some Democrats are suggesting that they won’t do well in the midterm elections next week because of the disenfranchisement of black voters. (AP Photo/Morry Gash)

“Anybody who looks at the data realized that if the black vote, and the brown vote, doesn’t turn out, we can’t win,” she said. “It’s just that simple.”

As more polls have predicted GOP gains in the House and Senate, Democrats have increasingly blamed voter ID laws in states with Republican governors as the reason why Democrats don’t have a shot at picking up seats. Democrats have argued for months that voter ID laws keep minorities from voting.

Rep. Barbara Lee (D-Calif.), a former chair of the CBC, wrote this week that while the U.S. has made progress trying to end racial inequities, voter ID laws are a remaining barrier to that goal that must be removed.

“[R]acial discrimination is far from over, especially in voting rights,” she wrote. “We have seen this discrimination in voter ID laws, limited early voting, and biased attempts at redistricting.”

“The only way to end these discriminatory laws and practices is to vote on November 4th for candidates that support restoring and protecting the voting rights of all Americans,” she said.

Lee and other Democrats have blamed a 2013 Supreme Court decision for allowing voter ID laws to remain in place. In June 2013, the court struck down part of the Voting Rights Act that sets out the criteria for deciding which state and local government need to have their voting rules approved by the federal government.

Those rules were designed to monitor states and counties, mostly in the South, that had a history of discriminating against blacks at the polls. But the Supreme Court said those guidelines are outdated, and don’t reflect the changes and improvements seen in many of these Southern states.

That ruling essentially nullified language in the law allowing for federal oversight of local election rules, a provision that cannot take effect again until Congress agrees on a new set of rules. A bipartisan bill has already been introduced to create these new guidelines, but Lee accused Republicans this week of stalling the bill to keep minorities from voting.

“Sadly, the House Republican leadership refuses to hold a hearing or vote on the bill, despite broad bipartisan and public support,” she wrote. “We can pass this bill but there are those in positions of leadership, that are afraid of minority, young, and older voters.”

“They want to turn back the clock to the days of poll taxes and Jim Crow,” she added. “As a community and nation, we have come too far to allow the clock to be turned back.”

Republicans have defended voter ID laws as a way to ensure only U.S. citizens vote, and have said they are not trying to limit the participation of any legal voters. Still, GOP gains in the House and Senate are likely to be seen by Democrats as proof that Republicans worked successfully to keep minorities away from the polls this year.

Some Democrats already appear to have drawn that conclusion. In the wake of a Supreme Court decision allowing Texas to keep its voter ID law in place for the midterm election, Sen. Barbara Boxer (D-Calif.) said studies show that law will keep 600,000 otherwise eligible people from voting.

“The Republican Party has decided that rather than meet the needs of the emerging voting block, they’re going to try and disenfranchise them,” she said, according to KCBS in San Francisco.

“It is so sad to see the party of Lincoln has taken this approach,” Boxer said in a separate interview with PJ Media. “They can’t win on the issues so they’re trying to stop people from getting to the polls.”

Boxer also said she would introduce legislation forcing any state with a voter ID law to ensure that people have easy access to free government IDs. That proposal is just one of several that Democrats could pursue in the next two years under a GOP-led House and Senate, a prospect that seems increasingly likely based on the latest polls.

And outside of the charge that Republicans are trying to manipulate voting rules, some Democrats say racism toward President Barack Obama is also hurting Democrats’ chances.

“I’ll be very, very honest with you. The South has not always been the friendliest place for African-Americans,” Sen. Mary Landrieu (D-La.) said Thursday. “It’s been a difficult time for the president to present himself in a very positive light as a leader.”


Previous THIS JUST IN: Kaci Hickox's roommate tested positive for Ebola without knowing how she came into contact with virus

Next NOW This is Halloween Spirit... or Spirits