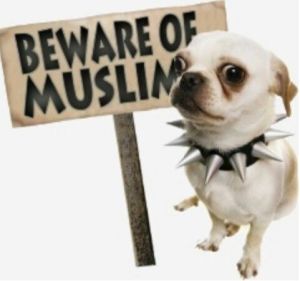 A Dutch Muslim politician has called for a ban on dogs in The Hague, the third-largest city in the Netherlands.

Islamic legal tradition holds that dogs are “unclean” animals, and some say the call to ban them in Holland and elsewhere represents an attempted encroachment of Islamic Sharia law in Europe.


This latest canine controversy — which the Dutch public has greeted with a mix of amusement and outrage — follows dozens of other Muslim-vs-dog-related incidents in Europe. Critics say it reflects the growing assertiveness of Muslims in Europe as they attempt to impose Islamic legal and religious norms on European society.

The Dutch dustup erupted after Hasan Küçük, a Turkish-Dutch representative on The Hague city council for the Islam Democrats, vehemently opposed a proposal by the Party for the Animals (Partij voor de Dieren) to make the city more dog friendly.

According to a January 28 report in the Amsterdam-based newspaper De Telegraaf, Küçük counter-argued that keeping dogs as pets is tantamount to animal abuse and he then called for the possession of dogs in The Hague to be criminalized.

According to its website, the Islam Democrats [ID] party is “founded on the Islamic principles of justice, equality and solidarity. ID is a bottom-up response to the large gap between the Muslim and immigrant communities and local politics…ID focuses on the political awareness within the Muslim and immigrant communities. Awareness about the need to organize, but also the need for mutual support.”

Paul ter Linden, who represents the Dutch Freedom Party (PVV) on The Hague city council, responded to Küçük by saying: “In this country pet ownership is legal. Whoever disagrees with this should move to another country.”

Dutch political commentators believe Küçük’s declarations are a provocation designed to stir up the Muslim population in The Hague. Muslims — who now make up more than 12% of the city’s population of 500,000 — view dogs as ritually unclean animals and Küçük’s call for a ban on them is a sure vote-getter, they say.

The incident in Holland follows dog-related controversies in other European countries.

In Spain, two Islamic groups based in Lérida — a city in the northeastern region of Catalonia where 29,000 Muslims now make up around 20% of the city’s total population — asked local officials to regulate the presence of dogs in public spaces so they do not “offend Muslims.”

Muslims demanded that dogs be banned from all forms of public transportation including all city buses as well as from all areas frequented by Muslim immigrants. Muslims said the presence of dogs in Lérida violates their religious freedom and their right to live according to Islamic principles.

After the municipality refused to acquiesce to Muslim demands, the city experienced a wave of dog poisonings. More than a dozen dogs were poisoned in September 2011 (local media reports here, here, here, here andhere) in Lérida’s working class neighborhoods of Cappont and La Bordeta, districts that are heavily populated by Muslim immigrants and where many dogs have been killed over the past several years.

Local residents taking their dogs for walks say they have been harassed by Muslim immigrants who are opposed to seeing the animals in public. Muslims have also launched a number of anti-dog campaigns on Islamic websites and blogs based in Spain.

In Britain, which has become “ground zero” for Europe’s canine controversies, blind passengers are beingordered off buses or refused taxi rides because Muslim drivers or passengers object to their “unclean” guide dogs.

In Reading, for example, one pensioner, a cancer sufferer, was repeatedly confronted by drivers and asked to get off the bus because of his guide dog. He also faced hostility at a hospital and in a supermarket over the animal.

In Nottingham, a Muslim taxi driver refused to carry a blind man because he was accompanied by his guide dog. The taxi driver was later fined £300 ($470).

In Stafford, a Muslim taxi driver refused to carry an elderly blind couple from a grocery store because they were accompanied by their seeing-eye dog.

In Tunbridge Wells, Kent, a blind man was turned away from an Indian restaurant because the owner said it was against his Muslim beliefs to allow dogs into his establishment.

In London, a bus driver prevented a woman from boarding a bus with her dog because there was a Muslim lady on the bus who “might be upset by the dog.” As the woman attempted to complain, the doors closed and the bus drove away. When a second bus arrived, she again tried to embark, but was stopped again, this time because the driver said he was Muslim.

Next VIDEO: Obama is a chickens**t anti-Semite!