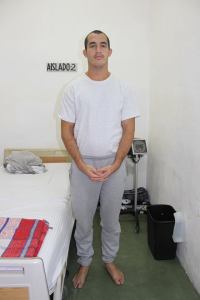 Tahmooressi, 26, who served two tours of duty in Afghanistan, has been held since March 31, when he said he mistakenly crossed into Mexico with three legally-purchased and registered guns in his truck.

A court-appointed psychiatrist confirmed that Tahmooressi has Post-Traumatic Stress Disorder.

Family spokesman Jonathan Franks said the judge released him without making a determination on the charge against him.


The family issued the following statement: “It is with an overwhelming and humbling feeling of relief that we confirm that Andrew was released today after spending 214 days in a Mexican Jail.”

The Florida man said he got lost on a California freeway ramp that sent him across the border with no way to turn back. His long detention brought calls for his freedom from U.S. politicians, veterans groups and social media campaigns.

Members of Congress were quick to react.

Rep. Ed Royce, R-Calif, chairman of the House Foreign Affairs Committee, immediately issued a statement saying, “I am elated that Sgt. Tahmooressi has been ordered released from jail in Mexico. This is great, but overdue, news. I am pleased that both Attorney General Jesús Murillo Karam and the judge on the case recognize that Sgt. Tahmooressi did not intend to violate Mexican law, and that his combat-related PTSD should be treated by specialists in the United States.”


Previous REPORT: DHS Employees Put Over $25,000 Worth Of Starbucks On Government Credit Card

Next Woman Sentenced to 3-Years in Prison For Hiding Gun In Childs Backpack, Reporting Him To School