In the final days before the midterm elections, the White House is trying to rally women voters behind paid family leave, a minimum wage hike and closing the gender pay gap. 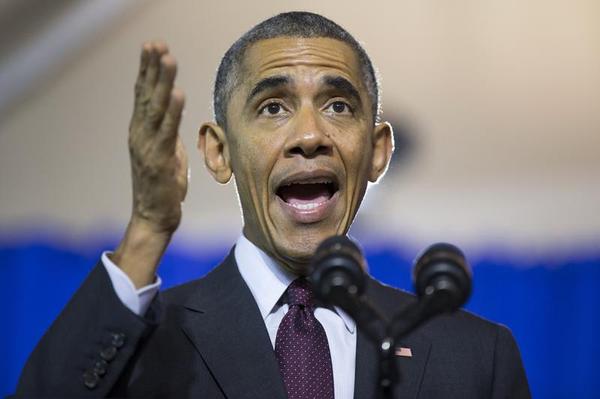 President Barack Obama speaks about the economy, Friday, Oct. 31, 2014, at Rhode Island College in Providence, R.I. Obama wants women to know what his administration is doing to help them succeed. Four days before midterm elections in which Obama’s fellow Democrats need a big turnout from female voters, Obama spoke in Rhode Island on growth in the U.S. economy and administration policies directed at women. (AP Photo/Evan Vucci)

A report by the White House Council of Economic Advisers highlights 11 points on how women, workplaces and families have changed over the decades:

1. The report says “more than 40 percent of mothers are now the sole or primary source of income for the household” and “among married women who are working, 24 percent earn more than their husbands compared to only 7 percent in 1970.”

2. Of dads, the report says, “Today 1 in 5 fathers are now the primary caregiver of preschool-age children.”

3. Women make up almost half, 47 percent, of the labor force, compared to 38 percent in 1970, the report says. The report states the “economy is 13.5 percent larger than it would be if women were employed at the same rate and worked the same number of hours that they did in 1970. That’s an additional $2.0 trillion in GDP due to the increased attachment of women to the labor force since 1970.”

6. The report says millennial women have more workplace equality than previous generations of women, attributing that to the late 1990s when women began to outpace men in graduating college.

7. Both parents work in 60 percent of households with children. That’s up from 40 percent in 1965, the CEA report states.

8. About 40 million Americans, or 16 percent of the population, care for an elderly relative. Men and women devote about equal time to this, according to the report. About 63 percent of these caregivers have jobs, while one in five are caring for young children.

9. Almost half of employees, 46 percent, think their job demands interfere with family.

10. The report says “one-third of workers have passed up a job because it conflicted with family obligations” while women are choosing career paths that provide flexibility.

11. Instead of citing facts, the final point of the report is that “Providing workplace flexibility and paid leave strengthens families, businesses, and our economy.” As evidence, the report cites a 2011 Gallup Poll that says flexible work arrangements increased productivity.

Democrats accused Republicans in 2012 of waging a “war on women.” Women were a key voting bloc for helping Obama get reelected that year. Democrats hope to repeat that on Tuesday in an effort to hold a majority in the Senate.

“These are issues that are too important to hinge on whether or not your boss is enlightened,” President Barack Obama said Friday after the report’s release in Providence, Rhode Island, as a group of women stood behind him on the stage.

‘I Hate to Wax So Biblical, But…’: The Reason at Least Six North Carolina Magistrates Have Abruptly Resigned


Previous Ferguson Protests heading to Geneva to the UN......