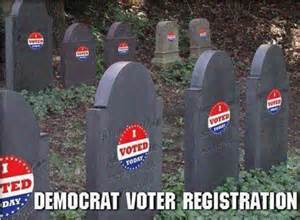 With a perfectly straight face, Barack Obama recently told Al Sharpton’s National Action Network that “the realvoter fraud is the people who try to deny our [voting] rights by making bogusarguments about voter fraud.” Eric Holder likewise contends, without even a hint of a grin, that voter ID laws are merely “political efforts” designed to make it “more difficult” for nonwhite minorities to “have access to the ballot.” And Hillary Clinton, too, casually dismisses voter fraud as a “phantom epidemic” that exists chiefly in the imagination of conservatives. Democrat consultant Donna Brazile puts it more colorfully, calling charges of voter fraud “a big ass lie.”

As they twist their faces into pained and pious countenances to give the appearance of passion and sincerity, these four individuals—along with all the other leading Democrats who invariably spout the same tripe—have only one significant thing in common: None of them actually believe even a word that they say about the rarity of voter fraud or the alleged injustice of voter ID requirements. In the privacy of their hearts, their efforts are devoted chiefly to refraining from laughing out loud at the absurd stupidities that they parrot ceaselessly—like Eric Holder’s claim that voter ID requirements are the equivalent of “poll taxes.” If the Democrats were honest, they would simply say the following:

We are moral crusaders who believe that the conservative vision of the world is evil beyond measure, and thatour vision of an ever-expanding central government that controls the economy, regulates every aspect of people’s lives, and redistributes everyone’s wealth and property as we deem appropriate, is by far the better course. And because our objectives are so much better for humankind as a whole, we are resolutely committed to using any means at our disposal to achieve them. Thus we will deceive, lie, cheat, and steal anything—including elections. That’s why we’re not at all ashamed of playing the role of imbeciles when we promote the vapid idiocies that we cite as reasons to oppose voter ID laws.

But instead of making honest declarations like these, the Democrats instead pretend to be unaware of very well-known facts like the following:


•A 2014 study found that two years earlier, some 155,692 registered voters in North Carolina alone had first and last names, birth dates, and final four Social Security number digits that matched those of voters who were registered in other states.

•The same study also found that 35,570 people who had actually voted in North Carolina, had first names, last names, and birth dates dates that matched those of voters who had cast ballots in other states.

•On election day 2013, undercover agents from New York City’s Department of Investigations (DOI) went to 63 different polling places and assumed the names of individuals who were ineligible to vote because they had either died, moved out of town, or been incarcerated. In 61 of the 63 instances, or 97% of the time, the agents were allowed to vote.

•In 2008, Democrat Al Franken won a highly controversial U.S. Senate race in Minnesota by just 312 votes. It was later discovered that 1,099 felons—all legally ineligible to vote—had nonetheless cast ballots in the election, almost exclusively for Franken. Consider this: Without Franken, the Democrats would not have had the 60 Senate votes they needed in order to pass Obamacare in 2010.

•A 2006 study found 77,000 dead people listed on New York’s statewide database of registered voters, and many of them had somehow managed to cast ballots from the grave. One Bronx address in particular was identified as the home of as many as 191 of these registered voter-corpses.

•In Milwaukee in 2004, approximately5,300 more ballots were cast than voters who were recorded as having shown up at the polls.

•In 2008, election officials nationwide had to discard at least 400,000 bogus voter registrations submitted by ACORN, the infamous, Obama-affiliated criminal operation masquerading as a “community organization.” No one knows how many other invalid registrations were never detected.

•In ten Colorado counties in 2012, voter registrations outnumbered the totalvoting-age population by between 4% and 40%.

•In a forthcoming article in the journal Electoral Studies, university professors Jesse Richman and David Earnest conclude that a significant number of non-citizens—who support Democrats about 80% of the time—vote in U.S. elections, and that “their participation can change the outcome of close races.”