Disturbing reports say that an angry crowd in Congo stoned a man to death and then ate his remains in an act of retaliation.

The incident in the town of Beni followed a number of overnight raids in the area blamed on the Islamist group ADF-NAUL, who are thought to have massacred more than 100 people this month, using hatchets and machetes to kill their victims. 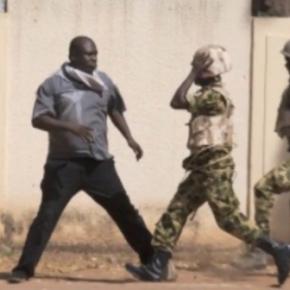 According to reports, the angry crowd stoned the man after locals became suspicious of him while he sat on a bus. The man reportedly couldn’t speak the local language of Swahili and was carrying a machete, so the angry crowd assumed he was a member of the Ugandan rebel Islamist group ADF-NAUL, who are responsible for a series of overnight raids in the area and for the slaughtering of more than 100 people just this past month alone. Members of the group have reportedly killed people with machetes, so when they saw the foreigner carrying one, they knew they had to act.

The crowd proceeded to stone the young man to death, burn his body, and eat his corpse in an act of retaliation for the raids and massacre.

Speaking from the town of Beni, Congo’s President Joseph Kabila said the ADF-NALU militants would face the same fate as the rebel movement M23, which was defeated by a U.N.-backed government offensive last year.


Previous After Years of Neglect, 9-year-old Boy Hangs Himself Only Days Before 10th Birthday