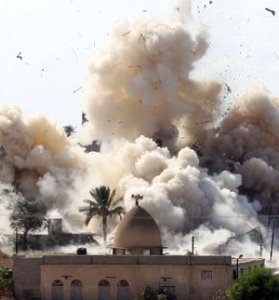 Photo, above: Smoke rises after a house was blown up during a military operation in the Egyptian city of Rafah near the border with the southern Gaza Strip. The demolitions come after an attack last week in the Sinai Peninsula killed 31 Egyptian soldiers.SAID KHATIB / AFP, Getty Images
From Ashraf Sweilam and Maggie Michael, Associated Press

EL-ARISH, Egypt – With dynamite and bulldozers, Egypt’s army demolished dozens of homes along its border with the Gaza Strip on Wednesday, after the military ordered residents out to make way for a planned buffer zone meant to stop extremists and smugglers.

The plan to clear 10,000 residents from some 800 houses over just several days has angered the area’s population, which has long held grievances with Cairo.

“To throw 10,000 people into the street in a second, this is the biggest threat to national security,” said Ayman Mohsen, whose sister left her house about 350 yards from the border. Speaking to the Associated Press via online messages, he said the army told residents to leave on Tuesday within 48 hours, and that houses would be blown up even if people remained inside.

Over the last decade, the northern region of the Sinai Peninsula has become a hub for Islamic extremists, although insurgency has spiked since last year’s military ouster of Islamist President Mohammed Morsi. It has also spread to other parts of Egypt, with extremists targeting police in Cairo and the Nile Delta.


The move to set up the planned 8-mile buffer zone, which will be 500 yards wide, comes after extremists attacked an army checkpoint near Sheikh Zuweyid town last week, killing 31 soldiers. No group claimed responsibility.

After the attack, Egypt declared a three-month state of emergency and dawn-to-dusk curfew there and indefinitely closed the Gaza crossing, the only non-Israeli passage for the crowded strip with the world.

Mona Barhomaa, an activist who lives 800 yards from the border and who is not affected by the evacuation order, said she supported the demolitions.

“The tunnels to me are like windows that for years my neighbors have used to infiltrate my house,” she said, referring to the underground passageways used to smuggle goods and weapons. “The tunnels led us into this hellish situation.”

Many residents were angered by the short notice and poor local organization, as well as a hostile media campaign unleashed days earlier that saw private and public television commentators equating opposition to the plan with treason.

Tanks and armored vehicles sealed off all of Rafah as thick gray smoke rose in the sky each time demolition charges went off and another house was toppled. .

The corridor will eventually be monitored by surveillance cameras and feature a water-filled trench that will be 40 yards wide, 20 yards deep, and run all along the border to the Mediterranean Sea, officials said.