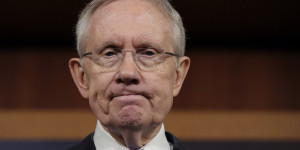 Joni Ernst, Republican Senate candidate from Iowa, has just put the Republican Party in control of the US Senate.

We at 3PN will update as news appears. The GOP has just taken the critical sixth Senate seat pick up to put them over the top to take control of the Senate.

More key races to be decided, but control of the United States Senate has moved to the Republicans.

Harry Reid, get your sorry ass out of town, you low-life piece of dog crap!


Can you say “IMPEACHMENT?” How about “MULTIPLE CRIMINAL TRIALS FOR TREASON?”

UPDATE: This just in (11PM EDT, November 5, 2014). Thom Tillis has just defeated Kay Hagan in North Carolina to put the GOP pick up at 7. Three key races yet to be decided.

UPDATE (3AM EDT, November 5, 2014): It appears that Dan Sullivan will take the senate seat from Mark Begich in Alaska. Still a little too early to tell, but indications at this point are that Sullivan has too large a lead for Begich to overcome. If the lead holds it will give the GOP 8 senate seat pick ups thus far, a 53-47 senate majority margin. Two senate races still undecided. Stay tuned.

I thought McConnell’s victory speech was exceptional. Now live up to those big words, Mitch….


Previous [VIDEO] Virginia Man to Confederate Flag Haters: 'You Need To Go Back To Africa!'

Next HURT: America faces most dangerous two years in 150 years