Gavin Dingman, an 11-year-old crossbow hunter from Michigan, recently made the shot of his life on a hunting trip with his father. But what the father and son didn’t realize was that one of Gavin’s proudest moments would soon turn ugly and even dangerous for the preteen. 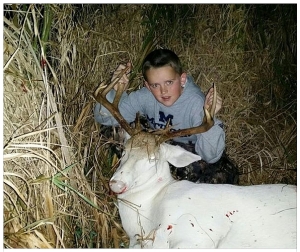 The young hunter had the trophy of the trip: a 12-point albino buck. Such a rare find was soon made famous when Jordan Browne, a host of the hunting TV show Michigan Out-Of-Doors, posted an image of Gavin with the deer on its Facebook page.

Though the post has received a lot of support – it currently has 12,928 likes and counting – the hate started to pour in, and it was directed at Gavin and his father, Western Journalism reports.

“There was one comment that someone should shoot that kid with an arrow,” Browne said, “and others along those lines. There were a lot of ignorant people blaming and scolding the parents for letting their child hunt, or as they put it, ‘murder’ things.”

Some outlets began to report that Gavin’s dad had goaded his son to take the shot. But that, according to Gavin, couldn’t be further from the truth.

Browne wrote on the Facebook page that they have had to remove hundreds of people from their page over their negative comments on the picture. They stand by Gavin over the game, which they acknowledge is “100% legal.”

As for Gavin, he’s not likely to stop hunting anytime soon: according to WJ, he has received several opportunities to turn his incredible shot into some advertising campaigns from local sporting retailers. Who knows what he’ll bag next!