C-SPAN’s Washington Journal, ordinarily a Lyceum-esque salon of rational discourse, had to cut a caller short Thursday morning when he referred to President Barack Obama with a racial epithet. 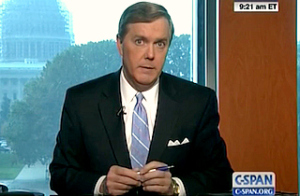 Anthony from San Diego warned his fellow Republicans not to “overreach” with their new Senate majority and induce a Hillary Clinton presidency. “This is about race,” he said. “The Republicans hate that nigger Obama.”

Host Steve Scully cut him off immediately, almost as if he’d had practice doing so. “You can certainly make your point, but you cross the line when you use language like that,” Scully said. “To our viewers and listeners, I want to apologize.”

Watch the clip below, via C-SPAN: