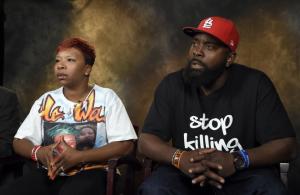 Lesley McSpadden allegedly led a group of 20 to 30 people to a tent in a parking lot in Ferguson, Mo. on Oct. 18 to beat and rob vendors selling ‘Justice for Michael Brown’ merchandise.

The mother of Michael Brown could be charged with felony armed robbery for allegedly attacking people in a Ferguson, Mo., parking lot because they were selling T-shirts honoring the late teenager.

The Ferguson Police Department is currently investigating claims that Lesley McSpadden brought a group of people — including her own mother — to beat vendors and rob them of their “Justice for Mike Brown” merchandise Oct. 18,The Smoking Gun has learned.

One person was hospitalized in the reported attack and another unidentified alleged victim was reportedly beaten with a pipe.


McSpadden’s former mother-in-law, Pearlie Gordon, was among those beaten by “a large group of about 20-30 subjects” who had “jumped out of vehicles and rushed” the group of sellers, according to the police report.

Gordon, 54, was allegedly knocked to the ground and repeatedly struck in the head. She detailed the brief exchange she had with McSpadden at the time of the attack.

“You can’t sell this s**t,” McSpadden allegedly said, according to the report.

Gordon responded that “unless McSpadden could produce documentation stating that she had a patent on her son’s name (Gordon) was going to continue to sell her merchandise,” according to the report.

Once the investigation is finished, Ferguson police will decide whether to charge McSpadden and the others with felony armed robbery.

The news comes as a grand jury is expected to announce whether to bring criminal charges against the Ferguson police officer who fatally shot Brown during a confrontation.

Next LOL! This week’s video lesson – “How To Speak Leftese,” by Andrew Klavan