He is one of the most distinguished members ever of the elite force – but now faces being frozen out of its circles for revealing its most closely-held secrets.

O’Neill’s decision to speak out was prompted by losing some of his military benefits by quitting the SEALs after 16 years rather than staying for a full 20 years of service.

The Daily Mail has published an exclusive report outlining how the former Navy SEAL Team Six member is responsible for shooting Osama Bin Laden, the terrorist leader responsible for the attacks on September 11, 2001, three times in the head on May 2, 2011. O’Neill is reportedly scheduled to appear on Fox News, and ahead of the interview, his identity is being revealed. 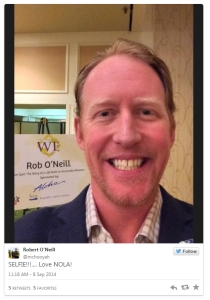 Since the 2011 mission was completed, much mystery has surrounded the identity of the SEAL who killed Bin Laden. Now that Robert O’Neill has been identified, his father is speaking out to the Daily Mail.

The vow of silence is one of the most crucial aspects of being a Navy SEAL, and in a letter to SEALS all over the world, Force Master Chief Michael Magaraci and commander Rear Adm. Brian Losey reiterated the extreme importance of that tenet.

“A critical tenet of our Ethos is ‘I do not advertise the nature of my work, nor seek recognition for my actions,’” wrote Rear Admiral Brian Losey, head of Naval Special Warfare Command, and top enlisted sailor Force Master Chief Michael Magaraci, according to the Daily Mail.

“We do not abide wilful or selfish disregard for our core values in return for public notoriety and financial gain, which only diminishes otherwise honorable service, courage and sacrifice.”

“All members exposed to classified information have a duty obligation to protect this information, regardless of what may be reflected in the media, accurately or otherwise,” they added.

“We will actively seek judicial consequence for members who willfully violate the law, and place our Teammates, our Families, and potential future operations at risk.”

As for risks of coming forward that do not include the Pentagon’s wrath, Tom O’Neill said he and his son are not worried about retribution.

Despite the strong condemnation from powers above O’Neill, the SEAL’s father says that he supports his son in coming out to talk about what he’s done.


Previous UK training 300 Libyan soldiers, who show their gratitude by raping half the town, including men