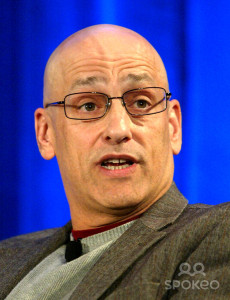 Andrew Klavan takes us on a terrifying, yet slap-your-knee funny, journey into the mind of the modern liberal.

I’m Andrew Klavan and this is the Revolting Truth.

Huzzah.  And also Hip-Hooray.  It’s time for another installment of the Leftese Dictionary.  A dictionary of left-wing phraseology is a very important tool now that very important tools are actually running the country.  We stodgy conservatives are mired in the old-fashioned practice of using language to convey thoughts and ideas, but zippy, forward-looking, youth-oriented leftists use words that aren’t weighed down by things like “meaning,” or “sense.”  They just wiggle their fingers in the air like this so that when they drive the country into the crapper they can say it wasn’t their “fault.”


But with careful use of the leftese dictionary, you should soon be able to put together complex leftist sentences such as “In a country like this, everyone should have free health care,” or “Greedy corporations are causing global warming,” or “I want to make the world a better place.” I know, right now, that just sounds like words being strung randomly together in dithering blasts of absolute nonsense, but soon you’ll understand these are ways of expressing important ideas like, “I’m a better person than you,” or “Give me more power.”

But hold on!  Before we can advance to such intricate use of leftese, we have to begin with some simple definitions.

Used as a noun, a Progressive is someone who believes that mankind progresses and becomes more civilized over time. Examples of progress can be found throughout history. For instance, the Roman Empire was militaristic and imperialistic but humanity finally progressed beyond it into a thousand years of darkness and savagery.  Or there was the Victorian era of sexual repression and racial chauvinism until we finally progressed into the glorious mass slaughter of World Wars, Holocaust and Communism.  And then we got the iPhone so…  you just have to be patient.

The idea of progress is built into another left wing phrase, “the 21st Century.”  In leftese, the 21st century means a magical place of peace and enlightenment. The phrase is found in such leftese sentences as “Putin can’t just conquer Crimea, this is the 21st century,” or “No religion wants to behead non-believers and enslave women anymore.  This is the 21st century.”  When this wonderful 21st century will actually occur is anyone’s guess.  Probably not for hundreds of years. In the meantime, the phrase can be usefully employed instead of taking meaningful action.

But if progress doesn’t come and the 21st century turns out not to be the 21st century, a leftist can always respond by being “smart.” For instance, as secretary of state, Hillary Clinton used “smart power” to transform Libya from an oppressive dictatorship to a blood-soaked hellhole.  President Obama used “smart diplomacy” to change Iraq from a shaky democracy to a bloodsoaked hellhole.  In leftese, the word “smart,” means ineffectual, or unrealistic.  Or stupid.

This is Andrew Klavan with the Revolting Truth.

Next CONSPIRACY NUTS: Mom Drove Children Off Cliff Because "Illuminati" Was Trying To Kill Her Family