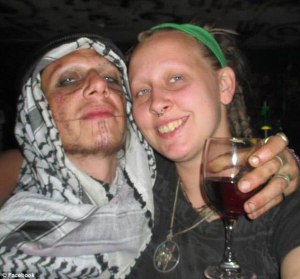 A man in North Carolina, who calls himself “Pazuzu Algarad,” murdered two prostitutes in a sacrificial ritual dedicated to the Middle Eastern demon Pazuzu, and then ate their flesh.

When investigators entered his home they found, not only a very tense and dark presence, but also Arabic script spray painted throughout the place. The media payed little to no attention to this, but we at Shoebat.com did an investigation of our own.

What we found is quite startling: this evil monster was a huge supporter of the Islamic religion and jihadism, and followed numerous jihadist groups on the internet. We did a whole video on this here:

From Theodore Shoebat and Walid Shoebat, via Powdered Wig Society

While we have found the Shoebats to be very credible sources, we have discovered a story in which the genders of Algarad’s victims is male, not female, as presumed. Link….

Next FLAT OUT AWESOME VIDEO! Former Marine goes to the White House, calls out Obama