A woman who allegedly drove herself and her young children off a cliff on Oct. 3 is now facing two counts of felony attempted murder charges reports the Press Democrat.

Police believe 35-year-old Athena Renee Doyle purposefully drove her 1992 Isuzu Rodeo off a cliff along Highway 1 in Northern California when her boys were inside the vehicle. It is unclear how long before the family landed upside down on a beach and when help arrived.

The children are only 2 and 4 years old.

According to the report, the cliff had a 300-foot drop and when it landed – it crashed upside down.

Over the weekend, Mendocino County Sheriff’s Capt. Greg Van Patten told the Press Democrat, “Charges were basically filed when a determination was made it was an intentional act and not an accident.”

Doyle was taken into custody on Halloween, Oct. 31. Prior to her arrest, only a day after the accident, Doyle posted on her Facebook page: 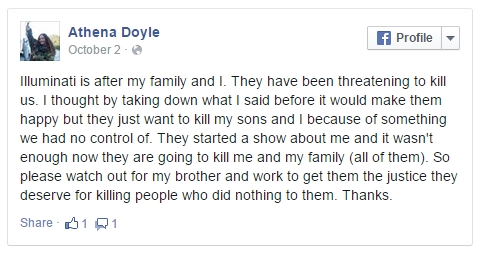 Doyle and her children were both taken to the hospital after the weekend, and were both eventually released.

At this point, it unclear when Doyle’s next court date will be or if she has an attorney.


Previous LOL! This week’s video lesson – “How To Speak Leftese,” by Andrew Klavan

Next Getting Stoned Across America: The Legal Status of Marijuana, State-By-State