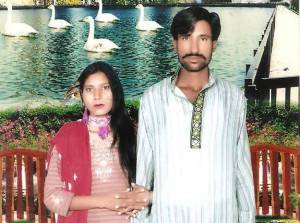 Then they wrapped the pregnant woman in cotton and threw her and her husband in a furnace.

The couple was accused of burning verses from the holy Koran. (NBC)

A mob accused of burning alive a Christian couple in an industrial kiln in Pakistan allegedly wrapped a pregnant mother in cotton so she would catch fire more easily, according to family members who witnessed the attack.

Sajjad Maseeh, 27, and his wife Shama Bibi, 24, were set upon by at least 1,200 people after rumors circulated that they had burned verses from the Quran, family spokesman Javed Maseeh told NBC News via telephone late Thursday. Their legs were also broken so they couldn’t run away.

“They picked them up by their arms and legs and held them over the brick furnace until their clothes caught fire,” he said. “And then they threw them inside the furnace.”

Bibi, a mother of four who was four months pregnant, was wearing an outfit that initially didn’t burn, according to Javed Maseeh. The mob removed her from over the kiln and wrapped her up in cotton to make sure the garments would be set alight.

Next Swarm of 750 quakes in Nevada prompts warning... Intensifying...