A Joe’s Crab Shack restaurant in Colorado Springs is under fire after it accidentally served alcohol to a group of young children — one of them just 2 years old. 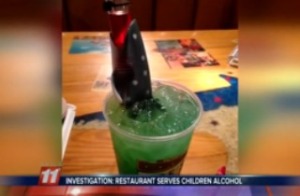 The kids, between the ages of 2 and 8, asked for a ”shark nibble” drink, according to one witness. After 30 minutes they called their server back and said they were not made correctly.

“Then the managers actually came back with the tray of drinks and then let us know that they had accidentally poured alcohol into our kids’ beverages,” one witness told KKTV.

The family was reportedly “frightened” because their 2-year-old niece had already finished her drink, which they did not know contained alcohol. The same witness said the manager told them the drink was simply “mislabeled.”

“Joe’s Crab Shack is aware of this incident at the Colorado Springs Location, and we are investigating this matter internally. We do not condone underage service of any kind. Our guests can rest assured that our processes are continuously examined so that incidents like this are avoided. “

Paramedics came to make sure the children were fine, and Colorado Springs police officials are now reviewing the case.

Watch the report below, via KKTV:

Next BEWARE: The 3 Most Common Types of Murderers You're Likely to Encounter On Facebook