An 18-year-old boy testified this week that he used a sword and a brick to beat his 5-year-old foster brother before allegedly drowning him because he thought he was a goblin army leader, this according to the Des Moines Register.

Cody Metzker-Madsen is on trial for killing his foster brother, Dominic Elkins, on Aug. 31, 2013 in Logan, Ia. Metzker-Madsen facing charges of first-degree murder and his attorney, according to the report, is using the insanity defense. 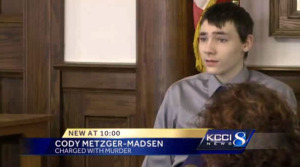 The 40 minute testimony was so troubling reports said Dominic’s biological mother had to leave the courtroom as the testimony continued.

When Metzker-Madsen took the stand, his attorney asked him what you would like to tell the judge, “Well, basically the truth. What happened was that, I was playing with Dominic and I was in my own world when I was doing it … my own world is pretty hard to explain. I loved the little guy, I would never hurt him,” he said. “Not even a hair on his fricken’ little head.”

On the day of the killing, both foster brothers were reportedly playing a game involving Roman mythology. At some point during the game, according to the Des Moines Register, Metzker-Madsen saw an army of goblins, it was a scene similar to a Skylanders video game. Metzker-Madsen continued about a scene in the game and how he was fighting the goblins’ commander and that’s when the alleged attack on Dominic happened.

According to the article and testimony, Metzker-Madsen admitted he did not realize it was Dominic as he was hitting him with a brick and pushing his head into the water. He just wanted to make sure the goblin didn’t come back to life and fight him. Metzker-Madsen also said, according to the report, he did not realize what had happened to Dominic until he was riding in a car later.

The Des Moines Register also said Peggy Madsen testified, Metzker-Madsen’s biological mother. She admitted to using meth daily during the first three months of her pregnancy and she had custody of him until he was 7-years-old.

As for Metzker-Madsen he also faces a brand new charge of assault, reports said after he allegedly bit another jailer in Harrison County around 9 p.m. on Tuesday.

Next Ex-Marine Sentenced to Death For Killing Veteran and Wife, After Raping Wife In Front of Him