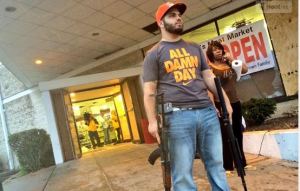 With a decision expected any time from the grand jury investigating the death of 18-year-old Michael Brown, protesters in the slain teenager’s home town have presented authorities with a list of demands to govern the impending riot.

I kid you not.

Information leaked from the grand jury has indicated that evidence does not support civil rights charges being filed against Darren Wilson, the Ferguson, Mo., police officer who shot Brown. Additional leaks suggest evidence shows that Wilson may have acted appropriately on the day he encountered Brown.

The list of demands, titled “Proposed Rules Of Engagement,” includes nineteen points and borders on being comical. One demand says there will be no “mass arrests.” Another states that police are expected to be “tolerant of more minor lawbreaking.”

The protests in Ferguson are now eerily reminiscent of Occupy Wall Street. Bearing Arms described protesters as “a coalition of race hustlers, Marxists, anarchists, cop-haters, and opportunistic thugs, who seek to capitalize on a smoldering mass hysteria.”