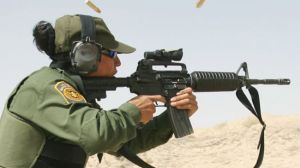 As if in preparation for more border chaos ahead of his expected Executive Order mass amnesty next month, Barack Obama is actually disarming Border Patrol agents on the border, according to News 4 Tucson.

KVOA reports that under the guise of “inspecting the quality” of agents M4 carbines “throughout Border Patrol sectors nationwide,” are conficating agents’ weapons – but agents report that most of those weapons have not been replaced.

Moreover, a military arms expert KVOA consulted said that he does not believe the story the Obama Administration is giving to agents:


Jeff Prather is a former drug enforcement agent who now runs the Warrior School in Tucson. He says agents have reached out to him about the rifle shortage.

Prather believes removing some of the rifles maybe politically motivated. He says he was told that many of these guns are being removed for issues that are easily repaired like the firing pin and bolt.

“This weapon is designed to be able to be in a battle situation, changed out rather quickly even so fast that modern weapons have areas to hold spare bolts,” he said.

That makes him suspicious that the agency could be disarming its agents.

As this stunning news is reported, one Congressional Republican staffer told Top Right News that he was “stunned” by this news, and that the Obama DHS has “a lot of explaining to do,” but would not predict whether hearings would be held to investigate.

Prather said agents stand the risk of being over-powered on the border.

“Cartels have always been better equipped, the paramilitary forces, the corrupt Mexican soldiers and Federales at times,” Prather said.

As TRN reported back in July, Mexican gunmen opened fire on U.S. Border Agents across the Rio Grande.  Just a few months earlier, we reported on uniformed Mexican troops who invaded the border in Arizona and held U.S. agents at gunpoint until the situation was diffused. Those soliders were released within hours without charges — yet an American Marine, Sgt. Andrew Tahmooressi, who mistakenly crossed into Mexico was held for 214 days without trial, before his release last year.

The Obama Administration has essentially surrendered the border to cartel thugs and invading illegal aliens, and this report will only increase anger among an American people already upset by Obama’s planned amnesty.


Previous CHARLES BARKLEY: 'A Lot of Blacks Think You're Not Black Enough If You Aren't A Thug'