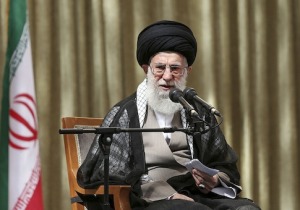 “Why should & how can #Israel be eliminated? Ayatollah Khamenei’s answer to 9 key questions,” Khamenei tweeted, along with a graphic illustrating the plan to annihilate Israel.


“The only means of bringing Israeli crimes to an end is the elimination of this regime,” Khamenei wrote. “And of course the elimination of Israel does not mean the massacre of the Jewish people in the region. The Islamic Republic has proposed a practical and logical mechanism for this to international communities.”

Khamenei accuses “the fake Zionist regime” of committing acts of “infanticide, homicide, violence, and iron fist while boasts about it blatantly [sic].”

Israel’s enemies must commit to “armed resistance” until Israel is eliminated, Khamenei says.

“Up until the day when this homicidal and infanticidal [sic] regime is eliminated through a referendum, powerful confrontation and resolute and armed resistance is the cure of this ruinous regime,” the supreme leader writes. “The only means of confronting a regime which commits crimes beyond one’s thought and imagination is a resolute and armed confrontation.”

Khamenei also reiterates his call for the West Bank to be armed like Hamas in the Gaza Strip.

Khamenei is “publicly calling for the annihilation of Israel as he is negotiating a nuclear deal,” Netanyahu said in videotaped remarks.

“There is no moderation in Iran,” said Netanyahu, who sent a letter to the P5+1 negotiators outlining Khamenei’s extremist rhetoric. “It is unrepentant, unreformed.”

Khamenei “calls for Israel’s eradication, promotes international terrorism … and [Iran] continues to deceive the international community about its nuclear weapons program,” Netanyahu said. “I call on the P5+1—don’t rush into a deal that will let Iran rush to the bomb.”

Next Mystery: NASA Hands Over Operations of Major Airfield to Google for Next 60 Years...