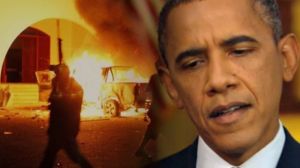 Now that Trey Gowdy’s special House Select Committee investigating the Sept. 11, 2012 attack on the U.S. consulate in Benghazi, Libya has gotten into full swing, we finally have a chance to get some answers and see justice served.

However, as the investigation unfolds, the committee has run into a very big problem regarding witnesses.

According to Talking Points Memo, it seems that 15 people who were “supporting the investigation or otherwise helpful to the United States” will be unable to testify at the hearings. Why?

Well, as it turns out, they’ve all been killed.


While the chaos caused by the 2011 overthrow of Moammar Gadhafi put Libya into a sort of violent death spiral, 15 witnesses who were assisting the investigation being killed is beyond suspicious.

At the very least, it’s clearly a failure of American intelligence; did no one think that human assets who were supporting the investigation as witnesses or otherwise were worth protecting?

Of course, given how the Obama administration has treated the Benghazi investigation, this information will give rise to all sorts of conspiracy theories about whether the administration was willfully negligent or worse.

It doesn’t help that they’ve been asking what difference it all makes, all the whilepressuring people in the media to drop the story.

The Senate report on the loss of the 15 Libyans is a classic example of understatement; “inadequate cooperation and a lack of capacity by foreign governments” is cited as the most immediate cause for the loss of life, and says that the FBI’s “slow and insufficient” investigation was to blame for not catching the murderers. You think?

Perhaps more importantly, the Senate report also stated that the attacks were preventable, and that lapses at the State Department and other agencies contributed to the security holes that allowed the attack to occur.

While the loss of witnesses is a setback for the Gowdy investigation, it seems that the enquiry on the Benghazi attack is finally on the right track.

However, it’s a shame that it took so long for our nation’s institutions to finally start taking Benghazi seriously.

Maybe if they’d gotten their acts together earlier, we wouldn’t have lost 15 key witnesses to violence and neglect.

Next Ferguson Protesters getting Militant Training on the use of Burning Tires and the Finer points of Protesting.