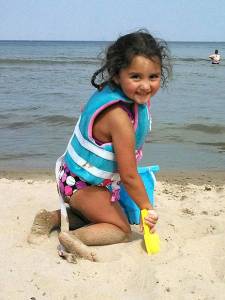 In Milwaukee, five-year old Laylah Petersen was shot and killed while sitting on her grandfather’s lap. It comes as no surprise that the mainstream media is completely silent on this, as well as race-baiters Sharpton and Jackson. Imagine that!

Two black males in Milwaukee walked up to the home of a white family, in a majority black neighborhood, and unleashed a hail of gunfire. A five year old white girl was murdered while sitting on her grandfather’s lap.

Milwaukee police say there is no question the shooters were deliberating trying to kill people inside the house. At least a dozen bullets were fired directly into the house. There may have been a third person driving a getaway car.

The house was located in a census tract that is 77% black and 14% white.

The Milwaukee Sentinel and Milwaukee channel 6 have actually been trying to downplay the murder. They are falsly reporting that it was “a stray bullet.” That directly contradicts all the evidence found by police.

In the video, below, Police Chief Edward Flynn speaks to reporters after a Fire and Police Commission meeting Thursday night, November 6, concerning the shooting of Dontre Hamilton, a black male who assaulted a police officer and was shot and killed by the officer. The officer was fired.

In light of the news of the murder of Layla Petersen, who was murdered by black thugs, and the continued questions from the press concerning the Dontre Hamilton case, Chief Flynn becomes understandably irate. The press is only concerned with the case involving a white cop shooting a black assailant. Sympathy for Layla is non-existent. Beyond sickening!