A day care worker in Clayton County, GA is facing a battery charge after allegedly kicking a small child.

Alexis J. Wilson-Britten, 22, was taken into custody and charged on Friday with kicking the 2-year-old, “in an attempt to push the child away,” this according to Officer Eddie Soto. The Clayton County Police Officer gave information in an e-mail to the publication. 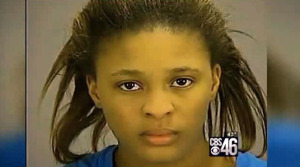 If you watch the video, you can see a few children in the frame when the small child approached the person believed to be Wilson-Britton with a toy in hand – that’s when her leg was lifted and pushed toward the child.

The incident took place at the Kids R Kids daycare. The owner, Robert Phelps, spoke out to Fox 40 and said Wilson-Britten was going to be terminated on the same day the incident occurred.

“Phelps confirmed, during a previous incident, Wilson-Britten taped a pacifier to a toddler’s mouth to keep her from crying. But then came two incidents that involved the children of a teacher, Kimberly Johnson, who also works at the daycare,” Fox 40 continued. Johnson also said in another incident, one of her twins was injured on the playground and Wilson-Britten never told her. The child was taken to the doctor, according to Fox 40, and was injured enough to have a fractured arm.

The daycare was paying more attention to Wilson-Britten’s behavior, that’s why they caught the incident.

Wilson-Britten was booked and released on the same day, this according to reports.

Next CHARLIE RANGEL: I Called Tea Party ‘White Crackers’ As ‘Term Of Endearment’